We left an hour after sunrise this morning, heading to two church plants I have been following with pictures and reports but have never actually seen.  Riding through the town on our way out, we pass women starting cooking fires and sweepers cleaning the streets.  The first shift of school children start walking to school and people are washing themselves from buckets of water.  The rhythms of the day have begun. 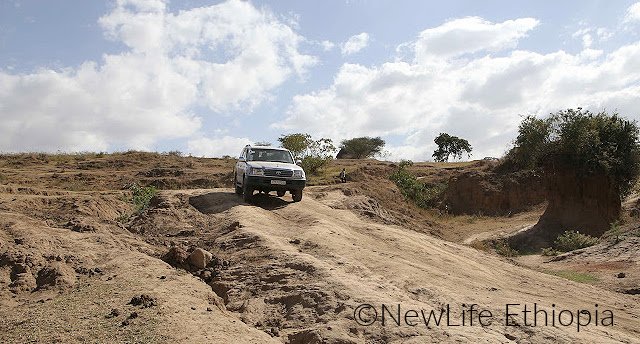 I won’t belabor the roads… suffice it to say they can only be traversed by motorcycle or 4WD.  In fact, our car was the only car out there!  Our driver is unflappable, picking the best way over gullies and through dry riverbeds.  He maneuvered dusty paths no wider than our vehicle, calmly facing the challenge of passing donkey carts, cattle and goats.

I was delightfully surprised that we were able to visit the church we are heading to. This is the “tarp church” I wrote about some months ago. (You can read about it here.) It is in an area that has seen a lot of ethnic violence and turmoil.  This tribe is 98% radical Mus!im and I was told it was probably too dangerous to travel there.  However, our missionary said things were okay for now and to come.  I am excited to do so! 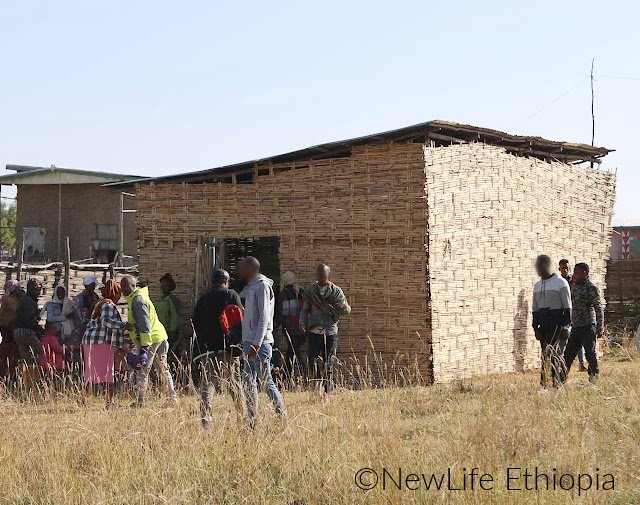 The tarp church I had seen in pictures got an upgrade!  The structure has been enclosed in a weave of straw and looks pretty spiffy.  It was wonderful to see so many people, adults and children, singing a welcome song for us as we were greeted by the elders and then ushered into the modest building.  Without knowing the backstory of this humble church, you cannot appreciate the significance of it even being in existence.

We have been working with two missionaries of this warrior tribe for many, many years.  They have stood strong in the face of death threats and mob violence, withstanding the rejection and antagonism of the local government officials.  Without government approval, not much can be accomplished in this town.  For two years the missionaries have been seeking property in order to build a worship center.  Individuals were told they could not sell to Christians and the government refused to give them property.  Then the drought hit and brought severe challenges to the people. NewLife provided missionary “K” with food over a period of three months to help alleviate the plight of the most desperate families. 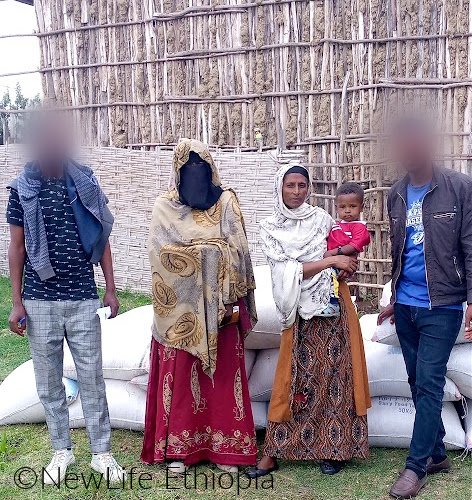 Showing no discrimination between Christian and Mus!im, “K” faithfully and lovingly gave away food to the neediest.  This support changed the way people viewed Christians, and the missionaries noticed a significant shift in the town’s attitude toward them after food distribution.  The government officials who had treated them so badly sought out the church leaders and apologized for their behavior.  They said from now onward they will consider this group of Christ-followers as friends because they met an urgent need, demonstrating a love they couldn’t quite fathom.  Their policy has always been to help only Mus!ims, but the Christians helped everybody.  To “K’s” immense surprise and delight, officials gave the church a lovely piece of land!   The only caveat is they requested we provide kindergarten education for their children. 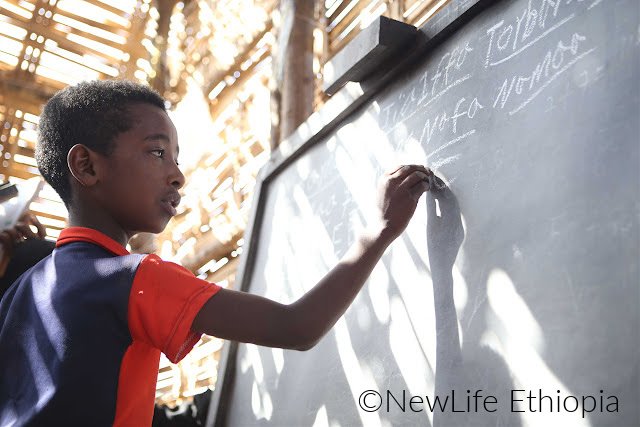 Missionary “K” is doing just that.  In the basket weave church, children crowd on benches facing a blackboard and “K” engages the children wonderfully.  It is as if he has been teaching children for years when it has only been six months!  We were astounded at the children’s writing proficiency when he had several come to the board and write their names.  He sends home slates and chalk to share with the children who live nearby one another, and they practice their letters. It shows!  The little ones sing songs about the parts of their body and recite their A-B-Cs.  I was grinning so broadly during the whole lesson my face hurt.  What a joy to see little minds engaged and learning!  “K” holds classes every Thursday and Saturday for 1 ½ hours.

After school let out we went outside and brought the benches with us so the adults could all sit down.  The church leaders shared much with us and gave Jason and I a broader and deeper understanding of the culture and challenges of this tribal area. 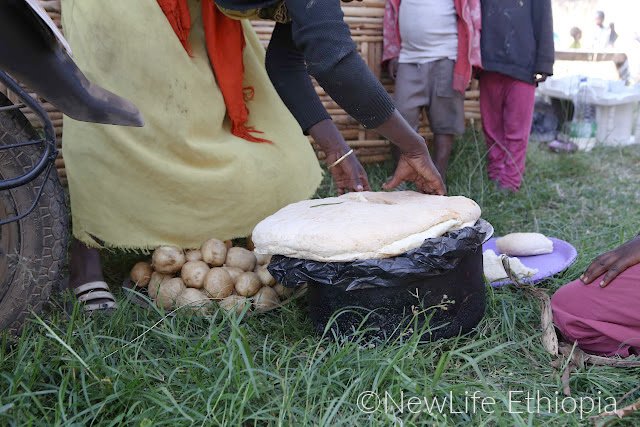 As Ethiopian hospitality dictates, a man poured water from a pitcher over our hands to wash before eating.  Women brought out platters of boiled dinichi (potatoes) and dabo (bread) for everyone to enjoy while we visited.   Leaving this morning before breakfast, the respite was welcomed and oh, so delicious!  As is customary in this country, freshly roasted coffee was also served.

People who have recently come to know Jesus are always eager to share their story.  It was no exception at this place, and I once again marveled at the varied ways the Holy Spirit draws people. 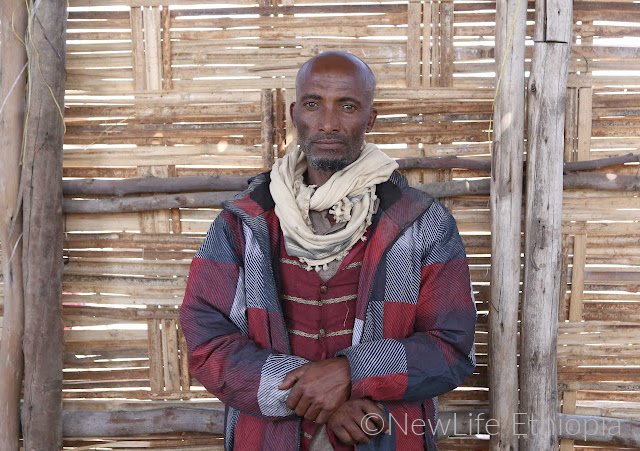 For seven years Abdi was so sick he couldn’t farm his land properly.  He was depressed, seeking various medical solutions to no avail.  During the fast of Ramadan he became sicker and sicker.  A Christian man and one of the missionaries came to his house.  They felt the presence of a strong evil spirit and found out that a man heavy into witchcraft was living with Abdi.  They advised him to have the man leave and live elsewhere.  Almost immediately upon his leaving, Abdi said the heavy depression lifted.  The two Christians then prayed for the water and had him drink it.  From then onward Abdi’s health improved. He continued meeting with the two Christ-followers, eventually giving his life to Christ.  He is strong and healthy and farming again.  His wife also has accepted Jesus.  Abdi is an active witness for the Lord telling Mus!ims everywhere what God did for him. 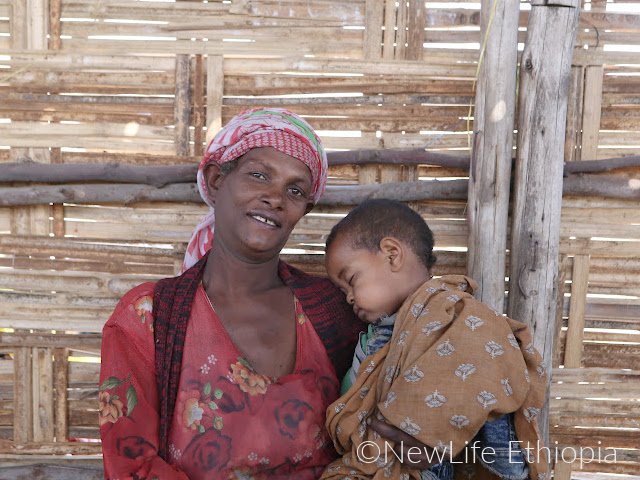 Bezunesh travels by bus 25 kilometers to have fellowship with this little band of Christians.  She has eight children and is married to a Mus!im man.  Her eldest daughter is grown and married and has become a Christ-follower.  Bezunesh became very sick with stomach and breast problems so stayed with her daughter while she was bedridden.  Her daughter called her church members to come and pray for her mother’s healing.  After prayer, Bezunesh’s pain and weakness completely left!  Her daughter continued to share about Christ and Bezunesh was so enraptured with the concept of salvation and experiencing His divine healing that she enthusiastically embraced Christ as Savior.  She told her husband about her experience, and he has allowed her and their children to pray to Jesus and attend church, but he remains a Mus!im.  The only Christians she could find were those in this town some distance away.  It costs her 10 cents to ride the bus to church, which she cannot afford, so Missionary “K” pays for her bus fare.  He is hoping to start a branch fellowship in her area at some point. 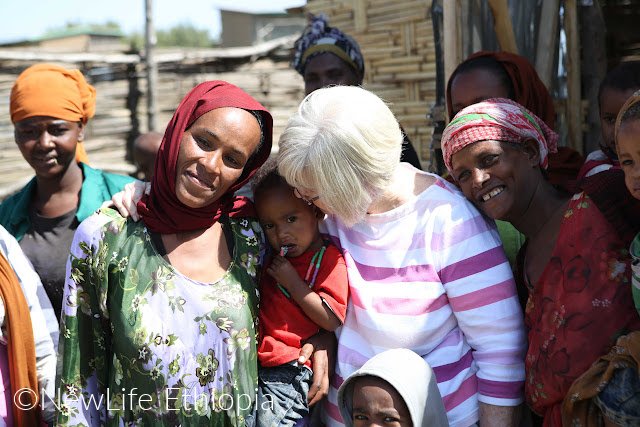 We loved our time with these brothers and sisters and hated to leave, but have a drive ahead of us to get to the other church we came to visit.  I especially loved seeing the wife of Missionary “K” who I have known for years and have watched their family grow. 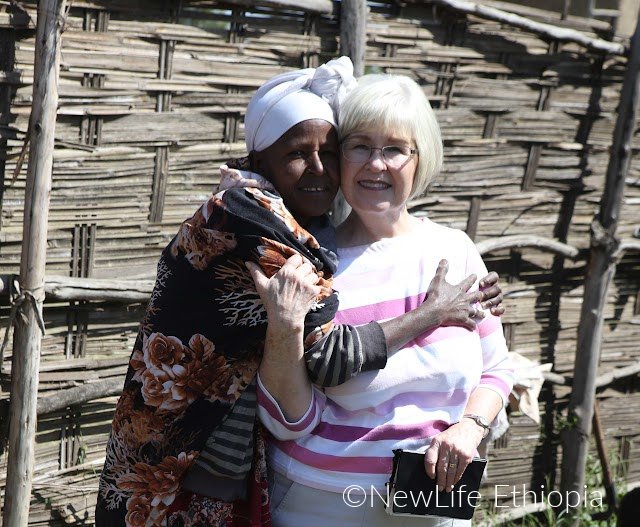 The women of this fellowship were especially friendly and loving and I wished I could have been able to linger.  Hugs will have to do for now.