How I wish you could have been with us today!  I know when you hear my stories you will understand what I mean, but I have to admit that getting to the church we visited was an ordeal.  Even though we were in a four-wheel-drive, the craters in the road made it feel like we were riding in a covered wagon over gully washed terrain.  Our abs got a workout!  After two hours of winding through mobs of people and laden donkey carts going to market all the while trying to avoid the worst of the worst potholes, we pulled up to a structure with walls of corn stalks and a blue tarp roof. 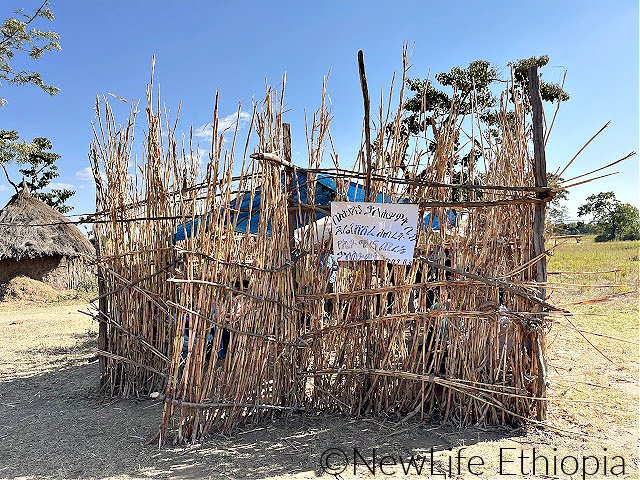 This is a miracle church.  For years our missionary has been sowing the seeds of salvation among his people.  He has been bitten (yes, that is right!), chased with sticks and spit on.  He spent a year recovering from a near death beating – and yet there he was with a huge smile to greet us and proudly introduce us to his church. 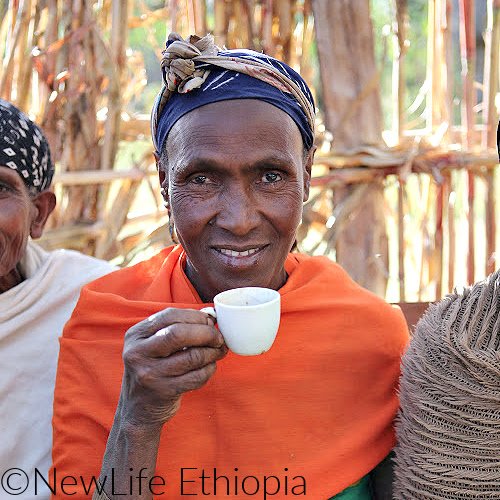 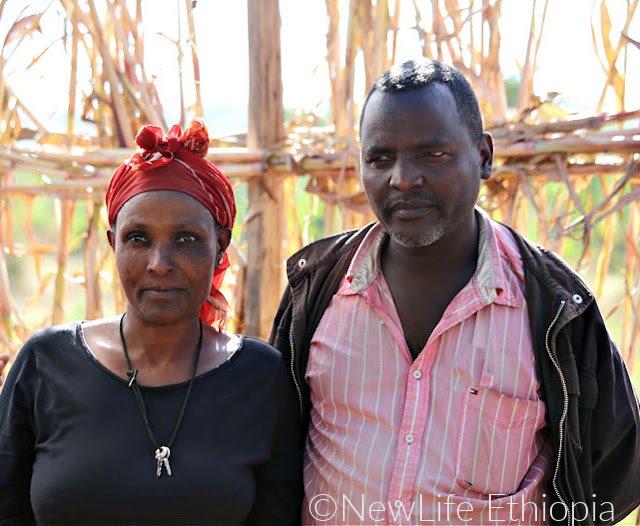 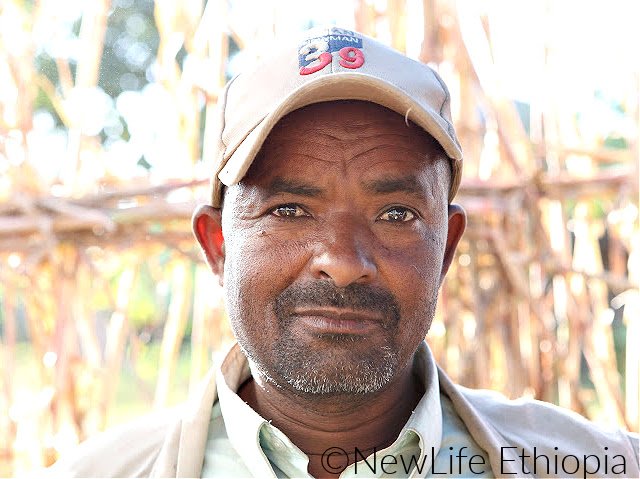 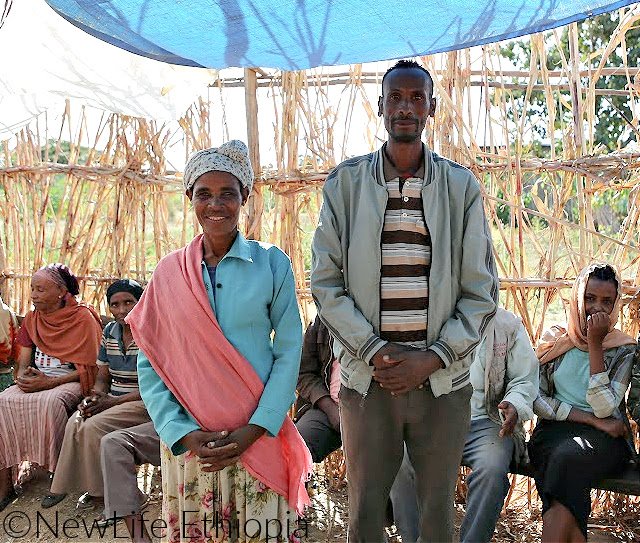 Thirty-eight families attend “J’s” church!  Grace Church in Olympia where Jason attends gave us money to build a church, and this group of believers so impressed us that it was decided to use this resource here.  They already have land set aside, so it won’t be long before work can begin. 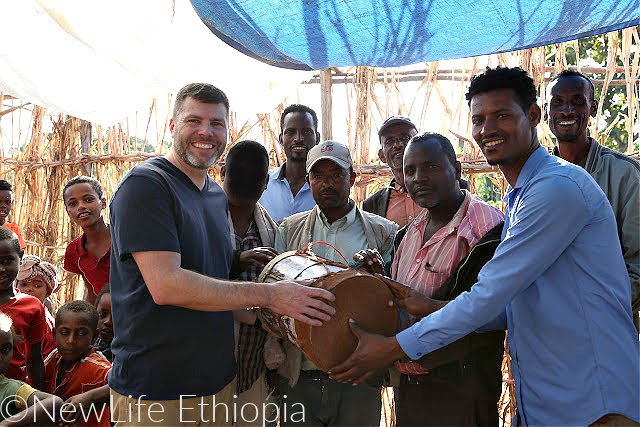 Jason has always wanted to bring home an authentic Ethiopian drum.  The drum is the only musical instrument used in worship and it was hanging from one of the posts.  He admired the drum — and they gave it to him!  He gave money to replace it and walked away extremely satisfied with his oil can drum with cow hide on both ends. 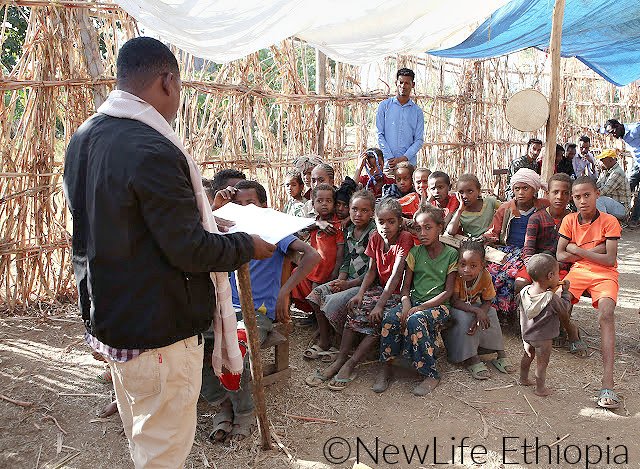 “J” had gathered as many children as could come so we could observe a literacy class he teaches two times a week to about 40 children.  Many of his students could not come at this time today because they had to help with cattle, but those that could get away came for a short lesson. 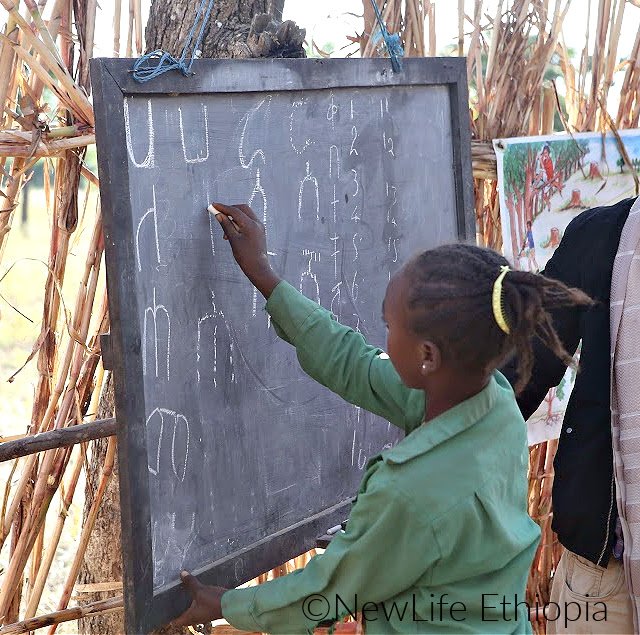 With only a blackboard and a few benches (not near enough seating), the children are learning the Amharic alphabet and other foundational pieces to reading.  The nearest school to this village is a three-hour walk away! 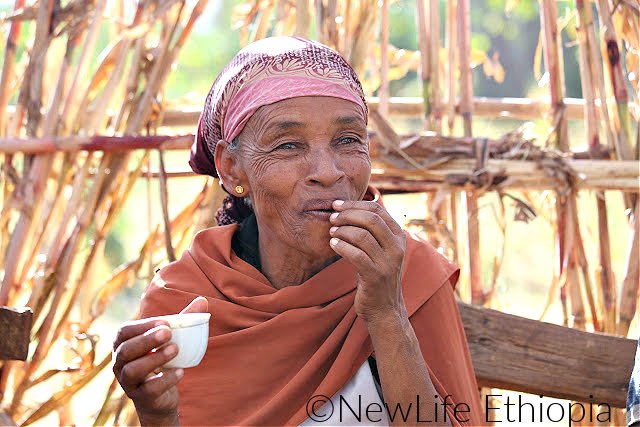 There is always coffee involved with any gathering in Ethiopia and today was no exception.  The ladies of the church served raw peas and popcorn with their coffee, although this coffee was like none we have ever had.  This village has a tradition of adding salt to their coffee, not sugar!  Quite unusual and also quite difficult for us to drink.  “It’s the thought that counts” took on new meaning. 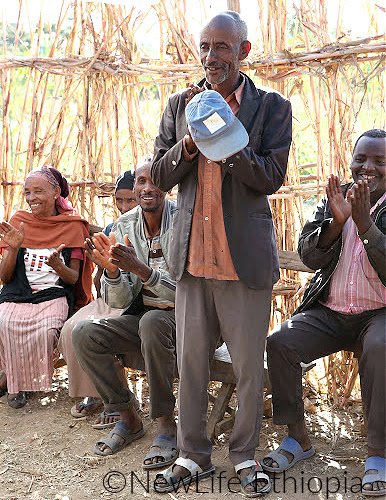 It was an absolutely wonderful time with our brothers and sisters in their cornstalk church.  I loved hearing the testimonies of how God draws people to Himself.  I enjoyed the enthusiasm of this new little church and can see the influence it will have on this community. 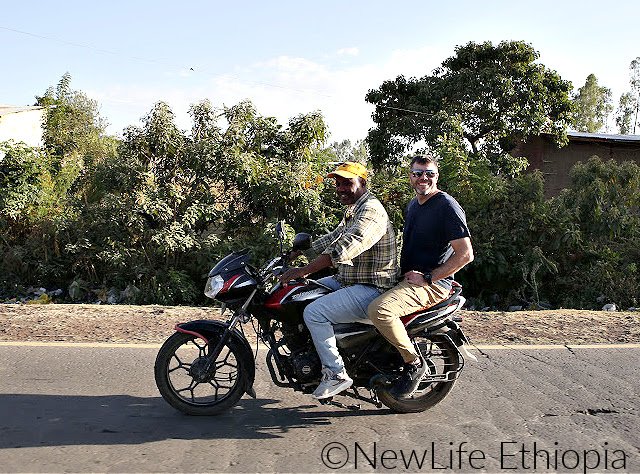 Jason hitched a ride on the back of the motorcycle of our area coordinator heading back to our hotel.  Fessessework, Jeff and I waved goodbye to the beautiful children and followed Jason in our sturdy four-wheel-drive.  Sharing with you about today’s events allows me to reflect on what He is doing among a people group that has never heard the Gospel.  One former Mus!im poignantly observed: “Because of “J”, our whole area has heard of Christ and the church is growing.  If only I had known the Light long ago, I would have followed Christ.  It is because of “J” that I and many others are His disciples today.”  “J” is a very humble man and knows that it is not him, but Christ in Him that draws people – he is only obedient to tell people about Jesus. 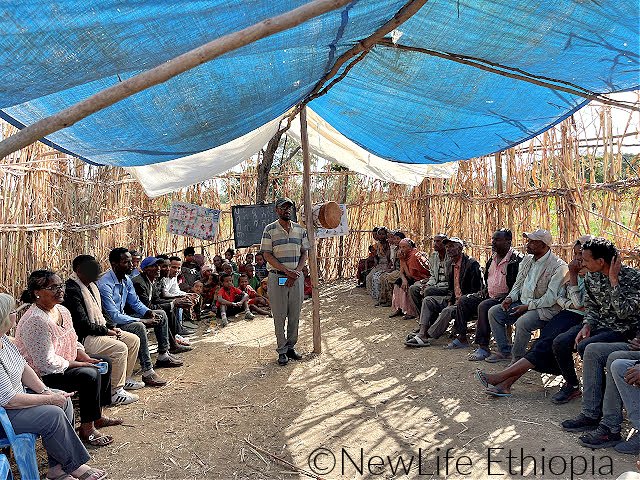 It is the end of a very long day, and I am physically tired.  At the same time, I am refreshed in my spirit and sit amazed that God lets NewLife play a part in birthing a church in the middle of a corn field that holds little significance to anyone but God.

*a letter is used in place of a name to protect the identity of our missionaries.