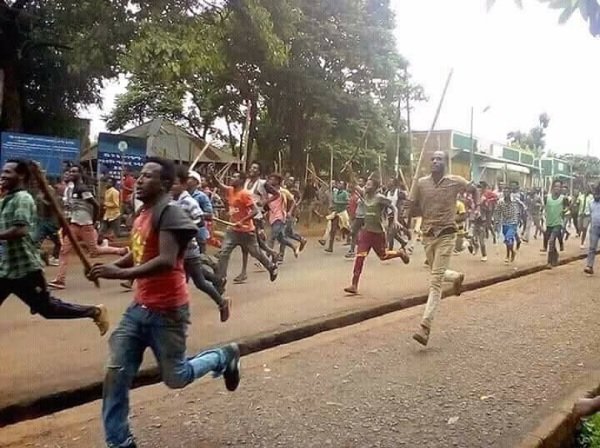 On June 30th a well-loved singer and activist from the Oromo tribe was shot and killed.  Just as George Floyd’s death initiated rioting throughout our country, the death of Hachalu Hundessa was the spark that ignited mobs of Oromo youth to attack people and property of other ethnic groups.  People are reeling from the 150 deaths and untold damage done to major businesses, hotels, schools, private homes and humanitarian compounds in several cities located in the Oromo region.  A large portion of Shashemene has been burned to the ground with many people left without homes.

The Mayor of Shashemene, Temam Hussein, said protests were peaceful at the outset, young people from the town protesting against the death of Hachalu Hundessa, but it took a violent turn a few hours later. He said: “Some had an agenda to divert it into an ethnic conflict and looting. Buildings, shops, houses were smashed, burnt.” (excerpt from “Ethiopian Observer” July 6, 2020).

Shashemene is where our orphanage is located, so NLE is understandably concerned for the safety of our staff and children.  Since the shooting of the popular singer, the internet has been shut down by the Ethiopian government so getting reliable news is difficult.  Today we were able to get through on the telephone to our country manager who has been in phone contact with all our primary ministry leaders.  A mob carrying sticks, metal rods and torches came to our orphanage director’s home, but he explained that he was Oromo from Ambo (the town Hachalu was from), so they bypassed his house.  When they came to the orphanage, our dear guard (who has been with us since 2012) faced the youth outside the compound.  He explained what we did and pointed out that our name, Mana Gammachuu, is Oromo.  The youth were convinced to leave.

Other towns nearby some of our evangelistic outreach areas did not escape aggressive anger and violence, but we are grateful that none of our churches, school or workers have been harmed.  One major reason is that all of our staff in these areas are ethnic Oromo; the frustration has been taken out on people and businesses that are non-Oromo.

Shashemene has been devastated.  Our U.S. and Ethiopian staff are discerning how NewLife Ethiopia can respond, or IF we can respond in a way to foster healing and give aid, especially to individuals who have been displaced.  But by far the best emergency response is concerted prayer.

Karl Barth said,
“To clasp the hands in prayer is the beginning of an uprising against the disorder of the world.”

Please, breathe these prayers throughout your day –