Who Is This Jesus?

We wound several hours through green hills to reach one of my favorite spots in Ethiopia.  Worship was in full swing when we entered the church that NLE helped build two years ago.  How the church came about has a rather unique prologue.

Four years ago, Pastor-evangelist Usman* began building relationships and looking for people to share the gospel with in this hilly M*slim village.  Slowly people came to understand who Jesus was.  When Usman’s livingroom became too small to hold the band of Christ-followers, a building dedicated for church needed to be built.  The leaders of the village were determined to run Usman out of their village and absolutely refused to grant land for a church to be built.  So, one of the converts, Abrihim*, gave his own land to the church.  This act caused a huge uproar, but at the end of the day the church was able to build a traditional thatch-roofed building with a cross on the top. 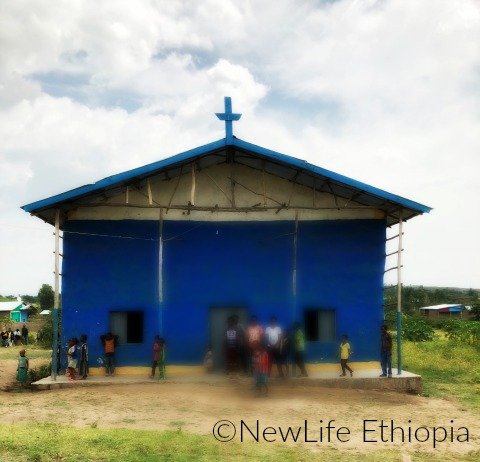 The action of Abrihim earned him so much animosity that at 3 a.m. several men torched his house and burned it to the ground.  Abrihim, his wife and three children escaped.  One daughter suffered burns to her face and all their personal belongings plus the maize they harvested for barter was gone.  The Christian community in America and Ethiopia galvanized support to build Abrihim a new house and replace his family’s clothes, bedding and cooking materials. 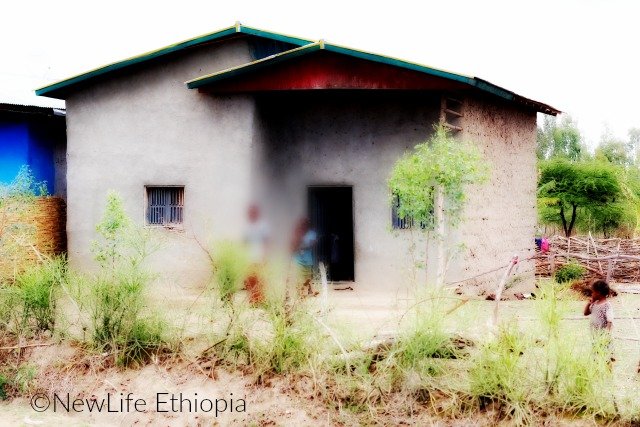 Who knew that God would use this tragedy to bring revival to this remote village.  As the townspeople saw how Christians responded to Abrihim’s plight, they were amazed.  They began to look at the few Christ-followers in their village differently and with respect.  Interest developed in who this Jesus was who could motivate people to be so generous and quickly come to the aid of a poor man they had never met. 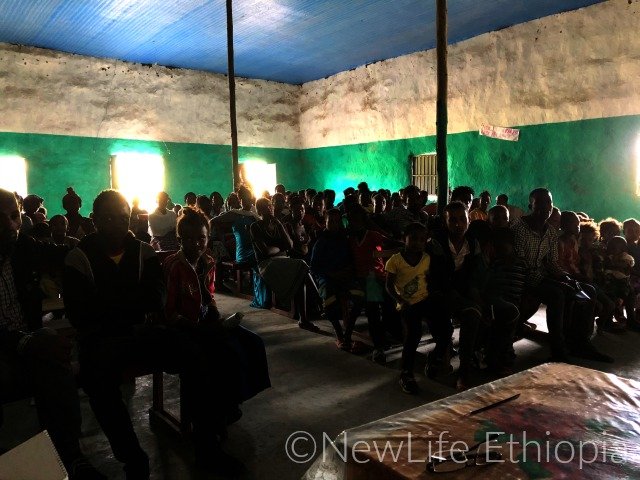 By the end of the year, 300 people had come to Christ and it was obvious a bigger building was necessary.  Most village leaders, those who previously were against the Christians, became radical Christ-followers!  Today, a vibrant congregation of about 400 people gladly and loudly proclaim their joy at who Jesus is.

The church service this morning was exuberant!  There are two choirs at the church:  an adult choir and a children’s choir.  Sixteen girls from age 7 to 13 lead by a teen girl playing a drum, lifted their young voices in traditional song with the congregation joining in.

I don’t cry easily, but every time I am in this church tears flow.  The Holy Spirit is so evident and His miracles in this village so profound. Following the church service we were invited for coffee at an elder’s home. 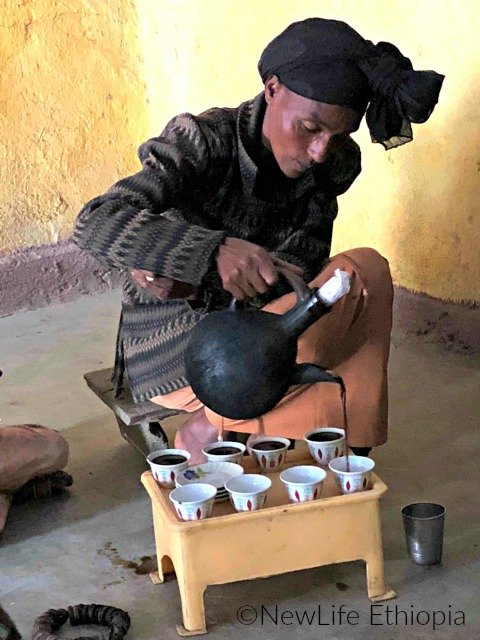 Ethiopian hospitality is relational and refreshing.  The smell of strong coffee permeated the house and fresh roasted lentils (still hot!) were served as an accompaniment. 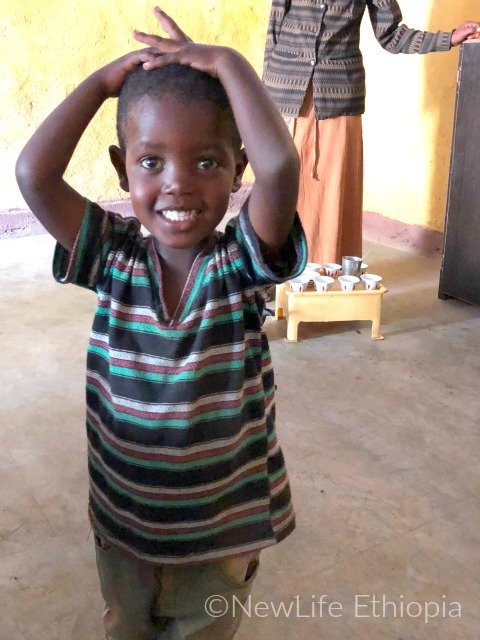 Pastor Usman’s little boy entertained Jason and I.  He is as cute as they come, animated, and has a confident personality of an up-and-coming leader. I drove away from this mountain village daydreaming of what it would be like to live among these gracious people.

I would build a little round house with a thatch roof and dirt floor.  My mind says, “Really Joy?  And do you realize you have to walk 12 kilometers (one way) to pack water?  You would go to bed when the sun dips behind the mountains because there is no light?  You would eat what you grow … maize, potatoes … and drink buna (coffee) from the beans grown down the lane after roasting and grinding them by hand?  Maybe I could grow chile peppers and sell them.  Me, a farmer?  Then there is learning a whole new language.  No one speaks English!  And would I joyfully wash my clothes by hand in water I had to spend hours hauling?”   Probably not, but it is fun to daydream.

Ah, well.  I don’t think my husband would go for it.  Anyway, God has a different purpose for me and I left extremely thankful for the call on my life that led me to be among these people today.

*Not their real names