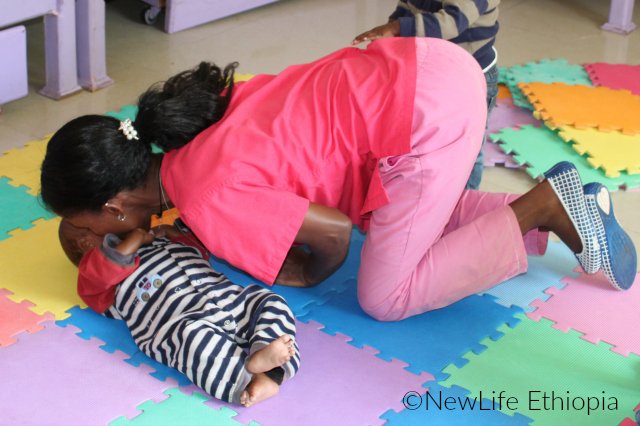 Last week when I was in Ethiopia, I spent a couple of days doing what I love to do — play with children and hold babies.  It doesn’t get much better than that!  The Mana Gammachuu (Joyful Place) orphanage is a busy, busy place.  We have 14 babies under 12 months, 4 of them extremely malnourished and needing a lot of TLC.  I was with one little 2-month-old boy who is skin and bones.  His head and eyes look disproportionately large compared to the rest of his body.  I was able to bring over 18 cans of preemie formula and he will be first in line to get that extra nutrition.  The other three have been very sick and had recently been discharged from the hospital where they were treated for almost a month.  UNICEF provides this hospital with a specialized formula for SAM (Severe Acute Malnutrition), and all four babies were given that, plus antibiotics IV and oxygen.  When babies are significantly underweight, they pick up infections easily and have little stamina.  Thus these little ones are easy targets for pneumonia, meningitis and the like.  It is pretty scary, and caring for them stretches our staff to the limit. 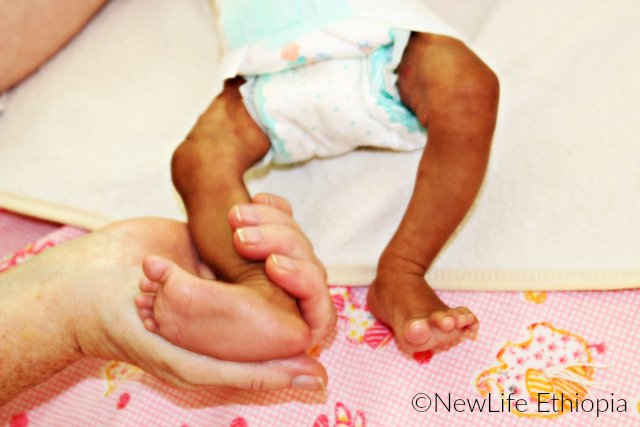 I visited the hospital our babies go to.  It is a government hospital and has a good reputation in the area.  But it is bare bones with one pediatrician.  There has to be someone (non-hospital staff) with the baby 24/7.  Patients bring their own bedding, blankets, pillows, clothes and food.  The tiny babies occupy a twin-sized bed in a ward with about 10 other beds.  There is no chair for the nanny to use, so she sits at the end of the bed.  There is nowhere to bathe the child, so the orphanage brings a bowl and gives sponge baths and carries the dirty laundry back to the orphanage to be washed.  You can imagine how relieved the nannies were when the babies were discharged!

On a happier note, four children will be adopted to local Ethiopian couples very soon.  Twins are now with their new family and two more sweethearts will leave soon.  The orphanage director was telling me how amazed and impressed he is with the families from Shashemene who have adopted or are in the adoption process.  He said they were the best.  I laughed and told him I felt the same way about the American families who adopt!

We have four 2-year-olds and are having a low toddler table built so they can have a place to eat that is just their size.  Our director is also looking for a college student to volunteer her time to do some creative play with the toddlers.  For those who are going for international adoption, learning a few English words will also be incorporated.

On my second day, I arrived at the orphanage about 8:30. The cleaners were busy washing clothes and the labyrinth of clotheslines were quickly filling up.  Floors were being swept and scrubbed and bottles washed.  It was sunny and the babies had just had their baths and were laying in a row outside on the porch all clean and ready for their day.  The walkers and crawlers were getting their hair done after their bath (not a favorite thing for some of the misses!).  After spending the entire day with them the day before, I was their new best friend and so I sat in the middle of the floor and we played.  It is my great joy to get to peek into their unique personalities.

As always, there was problem-solving to do.  The toddlers needed shoes.  The soap they were using was causing rashes and they needed to buy another, more expensive (Johnson & Johnson) brand of soap.  The woven mats they use outdoors for the babies to lay on were in tatters, so we went to the market and bought some new ones.  We talked about staffing, budgets and organization and it was obvious the biggest need (outside of formula) was for clothes.   It is a joy to be able to meet these simple, inexpensive needs – and an encouragement to the staff.

Life at an orphanage is sometimes chaotic when a chain reaction of crying ensues or when a strong-willed toddler wants his way and lets everyone know it.  But overall, the rhythm of the day is predictable, full of kisses and hugs, nap times, meals and snacks.  Joyful Place is a refuge for little ones coming from hard places but who are oh-so-precious in God’s eyes.