Every so often you meet someone who impacts your life profoundly.  It doesn’t happen often, and rarely do you know when shaking hands with your new acquaintance that it is the start of a deep bond that God is orchestrating. I met Mike and Dinah Monahan in our beginning years in Ethiopia, and God knit our hearts together for His purposes almost immediately.  I had heard of Dinah over the years… anyone involved in the pro-life movement since Roe vs Wade knew about Dinah and her unwavering work with pregnancy resource centers and homes for women facing unplanned pregnancies.  Her parents were grand movers and shakers of a movement to counteract the forces of abortion*, but Mike and Dinah took the relay baton from them and sprinted forward with their influence quickly felt all across the United States.  Mike built Heritage House ‘76 into one of the largest retailers of pro-life literature and supplies in the country, and Dinah developed literature and curriculum for pregnancy counseling centers that profoundly impacted  life affirming culture.

*In 1974 Dinah’s mother, Virginia Evers, ran across a full page ad in their local newspaper in San Diego, California. Prominent in the ad was a picture of the tiny feet of a ten week old unborn baby held between a man’s fingers and thumb. Inspired by the remarkable photo, Virginia Evers felt these little feet would be the ideal Pro-Life symbol. With love and dedication for the unborn, Virginia designed the “Precious Feet” lapel pin.  In 1979, at a world-wide symposium in Dublin, Ireland the “Precious Feet” were named the “International Pro-Life Symbol.” Since that time over 11,000,000 have been distributed throughout the world. 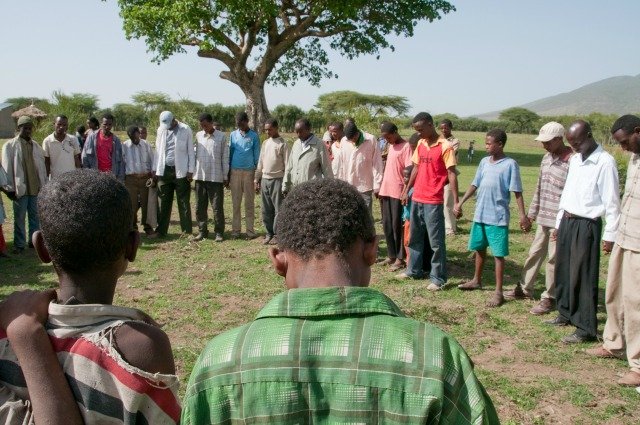 But knowing someone is far better than knowing about someone, and I was ecstatic when Mike and Dinah asked if they could meet me in Ethiopia “to see what God was doing”.  Little did we know what adventures He had in store for us!  Not knowing the Monahans well, I planned a fluff day in Addis Ababa so they could get acclimated a bit and see some of the sights before we plunged into the grueling schedule that generally defines my days in Ethiopia.  Upon arrival, I told them what was planned for the next day and they were mildly interested … and then our conversation veered toward a M*slim village that I had been made aware of down south and they immediately perked up.  After asking more questions they said, “Let’s go there!”  I was thrilled with their enthusiasm and quickly canceled our fluff day and instead made arrangements to leave at the crack of dawn for Gutumuma, a Muslim village in the middle of a savannah in the Rift Valley.  God was pouring His spirit out on this place, and we were excited to “go and see”. 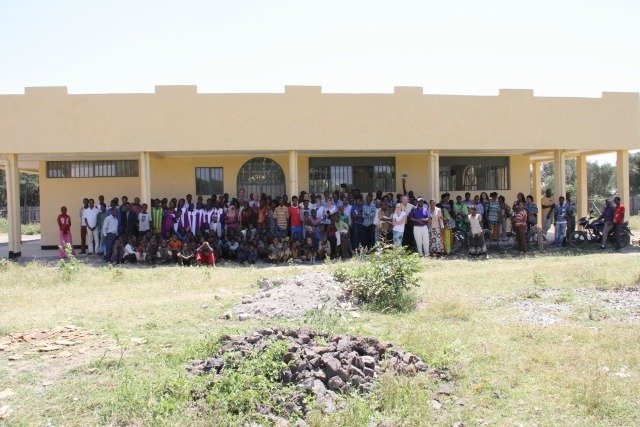 That trip launched our partnership with Watch and Pray to increase the influence of the gospel to this Muslim area.  Over the past six years, Mike and Dinah have provided financing to build kindergarten classrooms and a beautiful church as well as necessary infrastructure for the community and livestock for income generating for evangelists.  Dinah’s heart is for women, and the Monahans have spearheaded two women’s conferences for new Christian converts in Gutumuma, and they played a pivotal role in recruiting a pastor for this rural church. They have come back to visit several times and their enthusiasm and encouragement are contagious.  The day the new church building was dedicated was especially memorable because of their presence. 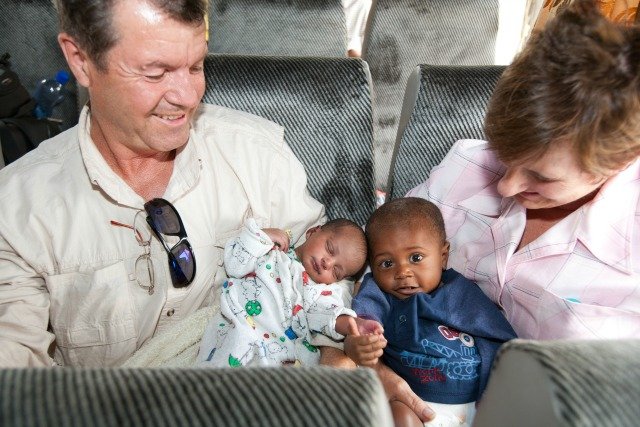 Little did Mike and Dinah know that they would meet their future grandson playing in a YWAM orphanage.  We had an orphanage in Gimbie and the Monahans joined me for a visit.  The roads were terrible and the two day trip was arduous, but Mike and Dinah were troopers and once there, loved playing with the children. 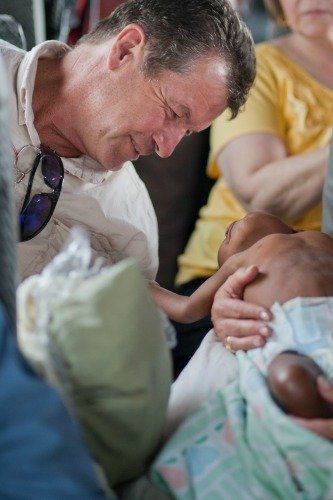 We decided to bring many of the little ones back with us to the main campus in Adama, so each adult had a baby to carry back.  Baby Geremew ended up on Dinah’s lap and he won her heart over completely. 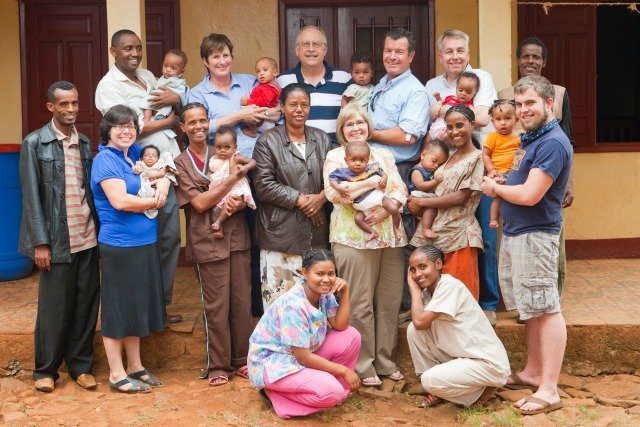 Two days in the van diapering and feeding babies brought our exhausted group to the Adama orphanage where we gratefully handed our charges over to capable nannies.  It was less than a year later when Mike and Dinah’s daughter adopted little Geremew who is now one of the Monahans many treasured grandchildren.  Subsequent to Geremew’s adoption, two other Ethiopian cutie-pies were adopted by their son, one a baby and the other an older boy. 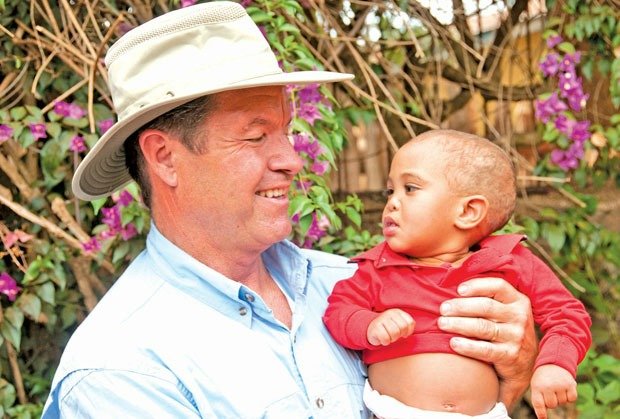 Over coffee one sunny morning while talking about subjects dear to both of our hearts (adoption and life issues), a plan was hatched to start a maternity home in Adama named after the Living Hope maternity home Dinah founded in Arizona.  Babies were saved through abortion education and intervention, and young mothers were stabilized and given a fresh start.  Paper bead bracelets were made by the women at Living Hope and have the life symbol of precious feet as a charm.  Today you can purchase one of these beautiful bracelets with all proceeds going to support babies in our Mana Gammachuu orphanage. Three years ago, the Monahans sponsored the first-ever pro-life conference in Adama attended by hundreds from all over Ethiopia.  Very recently, the home was phased out due to some legal issues in Ethiopia, but that did not dampen Mike and Dinah’s enthusiasm for what God was doing in Gutumuma and in other Muslim areas impacted with the gospel. 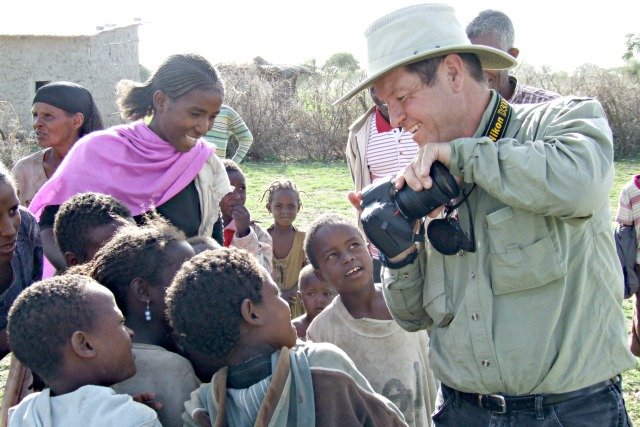 Working through cross-cultural challenges reveals a person’s character like nothing else, and my dear friends from Arizona never disappointed.  Their focus is on the Lord and their word is their bond.  What you see if what you get, and I am privileged to share a small part of their lives.  Last week, Mike died in a tragic accident and heaven is blessed to have him, but the world surely is the sadder for his absence.  He left a huge hole in his family as he was a loving father and an engaged and active grandfather.  The ‘Mike’ part of Dinah is missing and only God can give my friend comfort and courage to continue forward.

One week after receiving the tragic news of Mike’s death, their daughter placed a new baby in Grandma Dinah’s arms.  This new little one along with all the hugs and kisses from their other grandchildren reaffirms that life goes on, and will go on with fullness and zest for Dinah.  My perspective is that Mike’s life was cut short; his death untimely.  Yet, the reality of God’s Word is that He holds our days in His hands and His grace is sufficient.   Mike left behind an amazing legacy … five incredible children and their children, life-affirming ministry that his son will carry on, and a gospel movement in Ethiopia that is exploding largely because of his vision.   My friend lived life well.  I will miss him.