Five Ways to Minister to Adoptive Families
@lifeway.com
I hope you have seen a rise in adoptive families in your church… While all families — adoptive, foster, blended or otherwise — have unseen struggles, there are some unique challenges that kids who have been adopted and their families face that many kidmin teachers and volunteers may not be aware of.  Here are a handful of helpful considerations from an adoptive dad to help you minister more effectively to these amazing children and their forever families.

Somewhere to Run
@nohandsbutours.com
Unfortunately, the spiritual warfare doesn’t end once the adoption is finalized. It lurks in the background seeking opportunities to hurt our testimony and discredit God’s faithfulness. In fact, adoptive families are one of the most under attack groups of people I’ve ever come across. In talking with adoptive parents, I hear so many of them saying the same thing to me over and over again. The same things I’ve said to myself at various points in the journey. I feel so alone. I feel like I’m failing. The people I counted on for support aren’t supporting me. My social worker didn’t tell me this part would be so hard. The stress is getting to my marriage. Our extended family doesn’t understand what we’re going through. But oftentimes we aren’t as quick to see the see the spiritual warfare on this side of our Travel Approval.

A Note on Spelling
@Afaan Amarina
I often ask people here in Ethiopia how a certain word is spelled in Amharic or Oromiffa. Their usual response to this question is to just say the word slowly rather than write it down. When I write a word down two different ways and ask which is correct, I usually get “you are right!” It’s a hard habit to break, this desire to spell things correctly, but in both languages, if it is written as it sounds, it is written correctly. 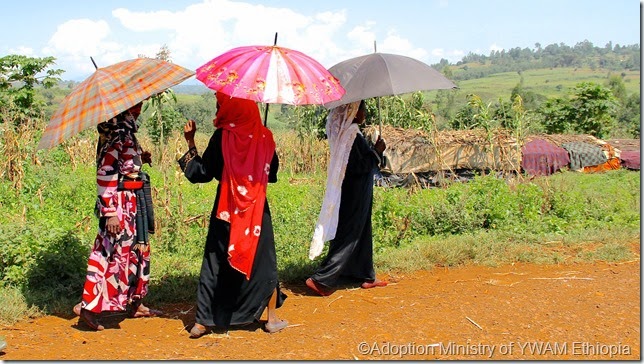 Of Light and Shade in Ethiopia
@Yahoo News
It’s Sunday and people are out with their umbrellas. Through the wide, golden landscape of northern Ethiopia, terraced from countless generations of touch by human hand, they walk to the nearest town and to the nearest church.

Hope for Lost Mamas
@flowerpatchfarmgirl.com
I never understood the depth of my emotional fragility until an adorable tyrant wormed into my heart.  I never knew how much I sought the approval of others until I felt like I had lost it.

To Mothers of Unattached Children
@overcomingmyself
We are sisters, you and I… We’ve been the recipients of abuse, emotional and verbal and physical.  We’ve had to turn the other cheek, put up a brave front, treat others the way they would want to be treated even though they refuse to do the same for us.  We have had to show love- real love, yes, but mostly fake love and somewhere-in-between love- to some of the most unlovable people imaginable, all in the name of healing.
Four Things to Do When Bringing Home A Child From Hard Places
@Vergenetwork.org
While we were in our process I had followed a few blogs as they brought their kids home and their honesty in the first few months after their children arrived home was so good for me. On one hand I had read that it wasn’t at all easy in those first few months, but on the other hand you don’t really comprehend that until it’s you in those shoes. My biggest advice when you bring your kids home is to know that this is a journey. Two steps forward and three steps back is how I look at it. It’s a long and hard journey and if you thought that your wait for your child was grueling, you have no idea what the next few months/years have in store for you.