A Gift of a Lifetime

Knowing that we’d soon be meeting the family that we’ve sponsored for over a year felt kind of like a blind date. We already considered Firehiwot and her kids a part of our family. The people of Shashemene have been in our thoughts and prayers daily, since Brooklake adopted them in 2012. We couldn’t help but wonder what our first meeting would be like and if Firehiwot would love us as much as we already loved her. We spent an entire day driving from Addis to Shashemene. The next day, our mission team went to Mana Gamachuu (the YWAM Orphanage in Shashemene) to distribute the monthly food and supply rations to the widows in the Adoption Ministry 1:27 sponsorship program that Brooklake supports. Ephraim, the Director, told us that Firehiwot just found out the day before that we had wired the money and fully paid for her new house. She knew a team of people would be there but she had no idea that Pete and I would be on the trip. 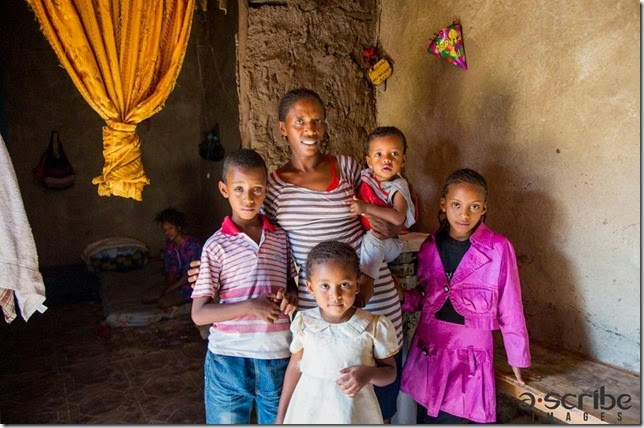 As our van pulled into Mana Gamachuu’s gate, we saw the women (about 45) seated in the grass awaiting our arrival. We all jumped out, eager to meet them. Pete and I were standing, waiting to hear what we should do next, when Ephraim walked up and asked if we’ve met Firehiwot yet. We said no. Even though we’ve seen her in pictures, I couldn’t pick her out of the large group of women. He left for a second and came back and said that she was coming over. Instantly, I had butterflies in my stomach. She emerged from the group and he spoke to her in Amharic. He was explaining to her that we were her sponsors! What happened next helped move this day from typical to one of the pivotal and best days of our life (along with our wedding day and the birth day of our son). 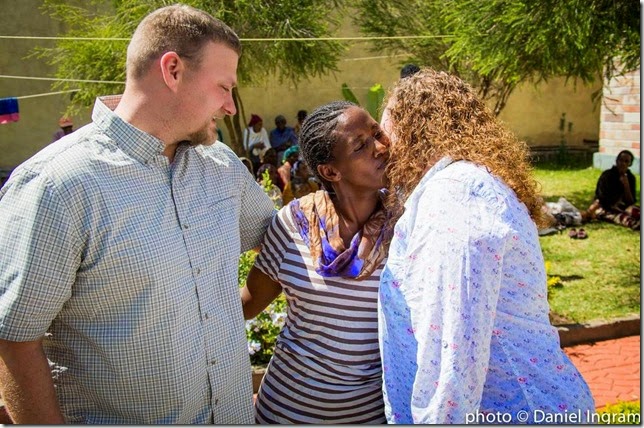 Firehiwot heard that we were her sponsors and she immediately leapt into our arms. She was hugging us so tight and tears were streaming down her cheeks. She doesn’t know much English but she kept repeating “I LOVE YOU! and THANK YOU!”. The look on her face said it all. Every ounce of her appreciation and gratitude showed and I could tell that she felt the same about us as we did for her. As we (Anna & Firehiwot) continued to hold each other, Pete surrounded us with his arms and just held us. There aren’t enough words to express what we felt in that moment. We all just held each other, sobbing with joy. I asked her where each of her kids were, calling them by name. She was astounded that we knew each one and knew their names. We wanted her to know that we meant it when we said that we consider them family. The kids were at home so she invited us to her property. 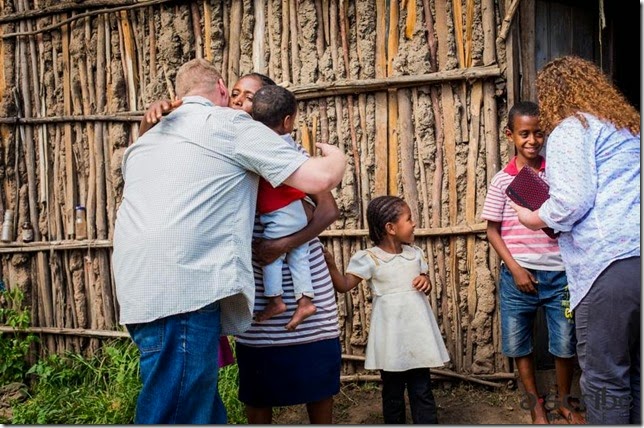 That afternoon, a group of us drove over to meet the rest of her family and check out the property. We were excited to see where the new house would go. The entire family and neighbors were waiting outside and greeted us as we pulled up. Besufekad, the boy that is a year older than our son and who we helped get medical care for his eyes, was a bit shy and stood behind the family. We called each of the kids by name and they continued the be mesmerized by the fact that we actually KNEW them! We took time to hug and kiss each of them and Firehiwot asked us to come into the existing home. She showed us around the 2 rooms and then we brought out the puzzle piece picture we had made of their family. We explained that it was through God that we were able to provide the new house for her and that many of our friends and family donated to help with the costs – we didn’t do it alone. We explained that each puzzle piece contained the name of a donor and then our picture was at the bottom. I couldn’t get through the explanation without crying and Firehiwot began crying, too. It was so humbling yet so amazing to acknowledge how faithful and powerful God is and how he can work through even the most average of people. I read her the verse that we wrote on the back of the puzzle: Jeremiah 29:11 “For I know the plans I have for you,” declares the Lord, “plans to prosper you and not to harm you, plans to give you hope and a future”. Firehiwot immediately put the framed photo on the one table in the house. She continued to repeat “thank you – thank you”. 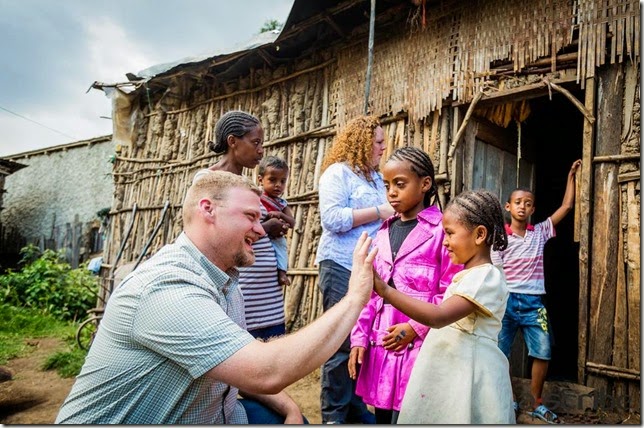 I know that verse is very true for Firehiwot and her family. God does have plans for them, and he will give them a future full of promise. Firehiwot is not defined by her circumstances. Her husband abandoned the family when she was pregnant and her older daughter left her own child in Firehiwot’s care while she abandoned the family, too. Yet, through all this struggle, Firehiwot has managed to keep the family intact and make sure her kids attend school, very hopeful to break the cycle of poverty that they’ve been subjected to. One thing never left – God’s love for the family and Firehiwot’s love for her children. We could feel that from the minute we saw them together. 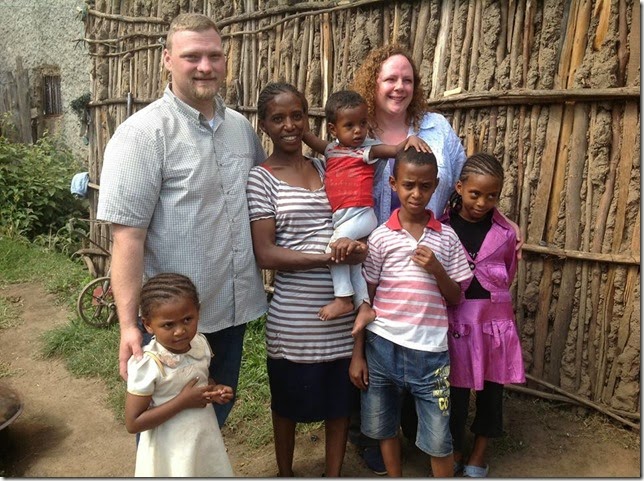 We had no idea this happened but after our meeting with Firehiwot, a few Brooklake staff members on our mission team interviewed Firehiwot. They asked her what life was like before we sponsored her. She told them it was pretty destitute and that she was able to send the kids to school but they had no food, she couldn’t even provide them with tea for lunch. Now they have plenty to eat and have access to medical care that is crucial to their survival. Besufekad can see again! The team asked her what it was like to meet her sponsors and through teary eyes she said “It was like meeting my mother for the first time. It was one of the best days of my life and when I look at them, I see God.” When we heard this, we stood there and cried. The magnitude of this entire day fell over us and we were speechless. We stepped out in Faith, following God’s plan for us. There were times of doubt, pain, and sacrifice, but we plugged on, knowing God was in control. The reward of that moment was greater than any struggle it took to get there.

The plan all along has been to use our sponsorship to stabilize Firehiwot’s family, get them healthy, provide a safe house for them to live in, and provide an income generating activity. Once that’s achieved, Firehiwot will be self-sustaining and will no longer need our support. She’ll be a contributing member in her community and will have a great freedom in being able to provide for her own family. Even though someday soon Firehiwot will no longer need our sponsorship, she will always be our friend and part of our family. We found out that Firehiwot has already taken the required classes and submitted her proposal to start an income generating activity. She wants to open a kindergarten and she’s well on her way. We are so proud of her and support her 110%. We hope to be able to travel back next year to see the family, the new house, and hopefully her business. Most of all, we just want to continue to show her that we’re there for her, we love her, and that God is providing a hope and a future for her. He is prospering her already! God is SO good and SO faithful. If ever we should forget, we’ll look back to this time in our life as just one of the many proofs he’s given us.