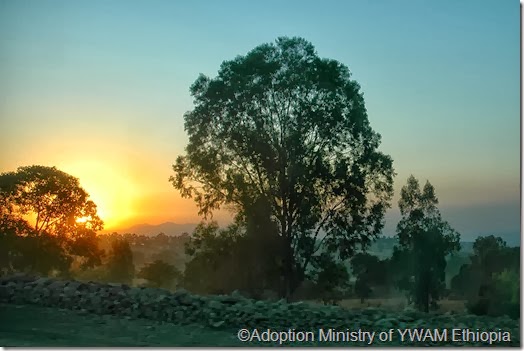 I woke up at 5:30 when a loud speaker blasted what sounded like preaching or government propaganda (I later learned it was preaching!) followed by incredibly loud music. The only consolation is the preaching and music drowned out the call to prayer that happens about the same time. There’s no sleeping in in Dembidollo! But being awake so early, I got to witness a beautiful day dawning. Here, close to the equator, the sun seems to come up quickly and the night dissipates into glorious morning in the blink of an eye. I peered out my window to the street below and already many people were out walking going about their business. 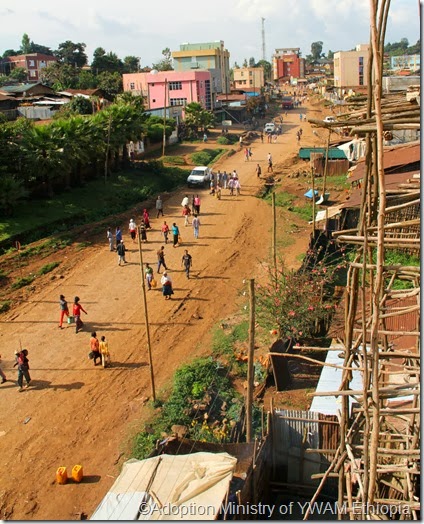 Dembidollo is remote, and I think I can safely say that 99% of the population do not have motorized transportation and simply walk everywhere. The streets are not designed for vehicle traffic at all and only a 4WD can go anywhere. The Dembidolloians are not used to cars and the streets are used primarily for pedestrian, donkey, goat and cattle traffic. 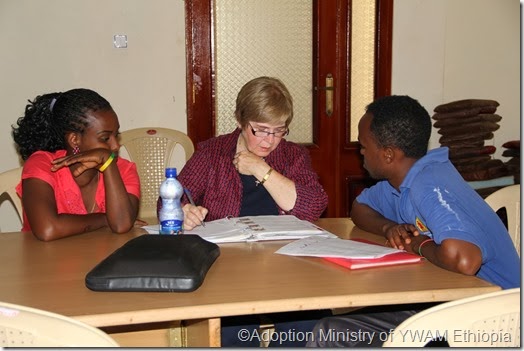 At breakfast Wakjira, one of AM 1:27’s case managers, met us and while we waited for our eggs started going over changes in families’ status and filling in data for the 80 families supported through Adoption Ministry 1:27 in this area. Our goal is to start IGAs (Income Generating Activities) for at least 6 families, so we analyzed the potential of some of the families and which ones should be identified for this next step of empowerment.

After eggs and incredibly good coffee, I wanted to see the two families whose sponsors purchased oxen for them so they could farm the land they own. We drove as far as the car could go, then piled out and walked several kilometers to Mikias’ house. There were the two oxen next to what I thought might be the barn but was informed that no, that was their house. 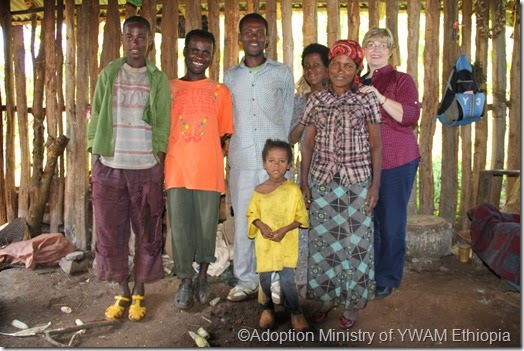 I have been in a lot of poor homes in Ethiopia, but this one took the prize for being the poorest excuse of a house I have ever seen. The house had a tin roof, but the walls were just sticks with no mud, so their “walls” were see-through offering zero protection from the rain and wind.

But the people in the house were precious. Mikias and his older brother take care of their two sisters, one of whom is physically and mentally disabled, and their niece and nephew. I saw one very dilapidated twin bed and an old tarp piled on the floor and learned that the two sisters and 5-year-old Ibsa sleep together in the bed. The two men and 13-year-old Yabetz sleep on the dirt floor under the well-worn plastic tarp. No pillows, no mattresses, no blankets, and no sheets in sight. Their sister Birhane cooks in a shed adjacent to the house. 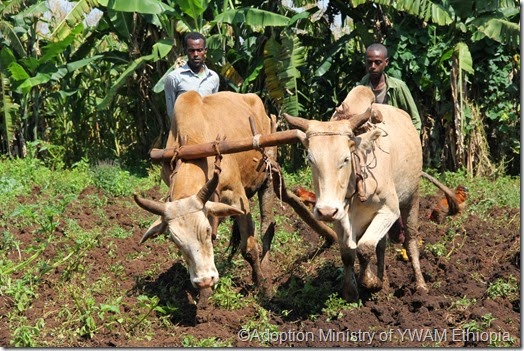 Outside, we watched Mikias yoke the oxen together and lead them to the field to plough. Mikias ploughed and Yabetz kept the oxen going in somewhat of a straight line, which didn’t look as easy as it might seem. They are ploughing up the land to prepare for planting in November, so I got to witness the old-fashioned way to rototill! They will plant maize, barley, cabbage, onion and tomato to sell in the market. They also want to get a couple of avocado trees to plant.

Thank you to Nathan and Melissa for the oxen! With that ‘cowpower’, this family has the potential to become self-sufficient. We encouraged Mikias and his brother to think big and expand the horizons of their future. 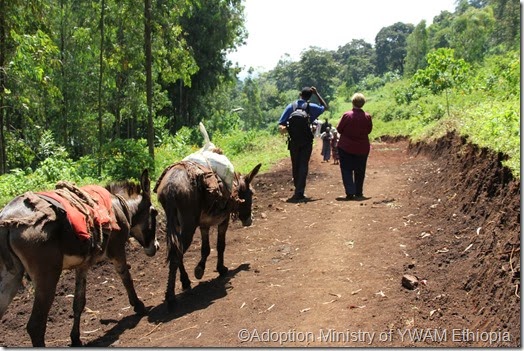 The second family who was blessed with a set of oxen from their sponsor lived a distance away, and after driving only so far, we hiked up hill and down dale until we came to Sanaye and Galalcha’s house.

Their oxen looked strong and healthy as did their strapping 22-year-old son, Fedesa, who is delighted to have the oxen and will be the primary farmer in the family. 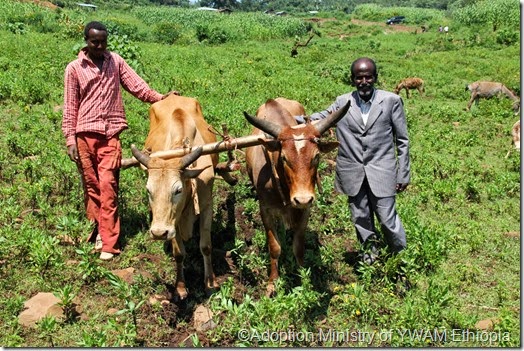 Galacha has leprosy and cannot do much physical work, but he certainly is a delightful man, bright and articulate in English. Fedesa was eager to show us how the oxen worked, so he yoked them up and gave us a grand demonstration. I only wish Gary and Nancy could have been with me to see the encouragement their gift of oxen is for this family – thank you so much! Fedesa will plant maize, beans, and peppers (berbere) to sell after this next growing season with an eye to hire out their oxen to their neighbors to share in that harvest 50/50. I have great expectations for the future of this family!

The scenery was beautiful and pastoral and looking over the lush, green hills I could have been in Montana or Wisconsin. The birds were singing and the air was pure… it was simply delightful to be out in the countryside! I enjoyed the hike, but was ready for some shade and a drink of water by the time I saw our car. 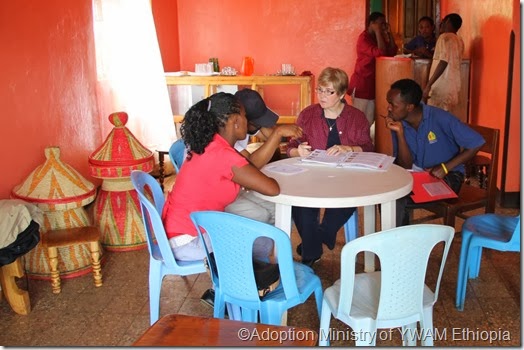 It was a working lunch with Wakjira as we continued with updates on the families. We identified a family with an ideal setting to raise sheep, so decided to go a visit them. It was quite a trek to get to their house and the surrounding green fields and hills reminded me of Ireland; this family was located in an ideal place to raise sheep. Their house bordered a vast green “lawn” owned by the government where they could easily raise healthy sheep; a river runs nearby for water. Several years ago, Tamru fell off the roof of a house and broke his back, laying him up for quite awhile. He is better now and works as a daily laborer putting mud on houses (he stays off the roof!). 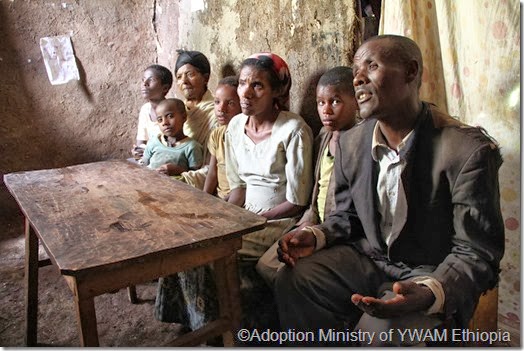 Tamru and Altaye (Al-tie-yea) have 5 children as well as Altaye’s mother living with them, and they are eager to earn money so they can fix up their house and ensure a better life for themselves and their children. Adoption Ministry can provide them with 10 sheep (5 ewes and 5 rams) from our gift catalog. The only money that needs to be raised is for a secure shed for the animals at night to protect them from the hyenas. Tamru’s earning ability is frightfully low and you can only imagine his excitement with the proposed opportunity presented to him and Altaye. This is a precious family who love the Lord with all their hearts and are actively involved in their church.

I told myself that the hike back to the car was good for me, and the beautiful scenery was certainly worth the effort … but I was breathing hard at the crest of the long, steep hill and glad to spot our trusty 4WD! We headed to the church office where we stored some clothing donations, and Wakjira and I finished up going over the families. Tomorrow morning before leaving we will narrow down the IGA candidates and I will wrap up our work with the Full Gospel Church and Adoption Ministry 1:27 here in Dembidollo. I have enjoyed these last two days to the fullest! Dembidollo has stolen my heart… the scenery and the people.

If you would like more information about adopting a family like the ones Joy mentioned in this post, please visit our Adoption Ministry 1:27 website here to read about how we are partnering with the Ethiopian church to preserve families and prevent orphans!