He who is kind to the poor

Come with me as I start out on a sunny day in Dembidollo heading up to the Full Gospel Church where I will meet and interview twenty families that the pastor selected to enter our Adoption Ministry 1:27 program. Currently, we have ministry partners that send monthly support to sixty families in Dembidollo and the difference the monthly support has made in lives astounds me. 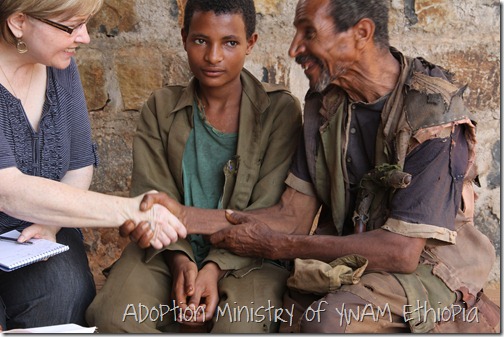 Yigesu Dubala came with his only son who is fourteen. Yigesu is crippled, secondary to boils on his leg that went untreated and consequently severely damaged his nerves. I was amazed to learn that this man walks four miles to church one way. He also has a 9-year-old daughter at home who was born with significant birth defects and she cannot speak or walk. Yigesu’s wife died three months after giving birth to their daughter and he has been the sole caretaker for his son and daughter. Life has not been kind to this family. Because of his disability coupled with his responsibility of caring for his daughter, Yigesu’s family struggles for the most basic necessities. 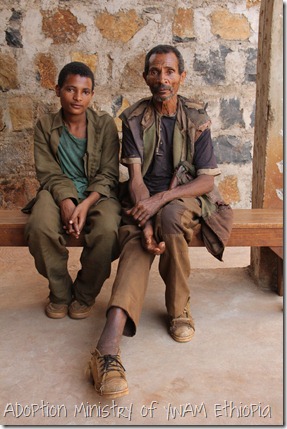 I noticed that Edosa, Yigesu’s handsome son, had a deep constant cough and I was concerned, knowing that they could never afford medical help. Their living situation was dire, too, and certainly did not contribute to overall health. They do not have a house to live in and the three of them are sheltered from the elements at night by living underneath a house. This family needed emergency support for food and medical attention. A friend of mine had given me money for just such a situation and I was glad to have it to give (thank you, Anne!). Yigesu is asking for an American family to help him monthly through Adoption Ministry 1:27.

Three hours later I finished interviewing and had identified three more situations that needed immediate attention and worked with our Case Manager on how to tackle the needs. I also wanted to visit some of the families already sponsored to see for myself the ways that Adoption Ministry 1:27 has helped some of the poorest families. 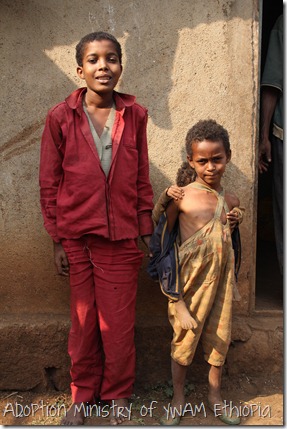 Last month I knew that a 14-year-old boy of one of our adopted families was given a blood transfusion that saved his life, and I suggested we visit Kasuhun to see how he was doing. 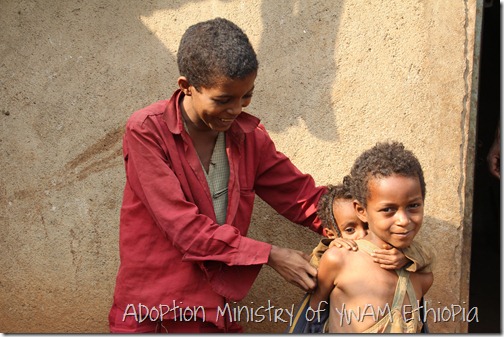 Kasuhun’s family is extremely poor with deteriorated overall health because of long-term malnutrition and bad water. Four months ago, a generous ministry partner sponsored this family and I was interested to see if there was a noticeable change in the lives of Kasuhun’s mother and father and three other siblings. Kasuhun’s father cannot work much because of bad health and so I wasn’t surprised to have him greet me, but I was concerned to learn that his wife was sick in bed.

Kasuhun appeared to be weak, but he was up and about and said he would be returning to school next week. He suffered from typhoid that caused his red blood count to plummet to a dangerous level and would have died if Adoption Ministry’s Case Manager, Wakjira, had not intervened and taken him to the hospital. The hospital does not have a blood bank, so Wakjira combed the town, found a blood donor and essentially saved Kasuhun’s life. Now his mother was so weak she couldn’t even get up. 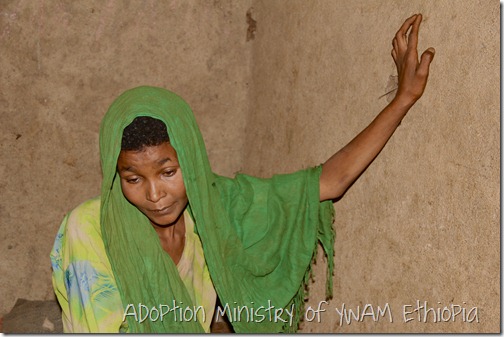 When I entered the dark room where she lay, she weakly told me I was welcome to her home… can you imagine? She was sweating profusely and in obvious distress. Pastor Garamu and I prayed for her and made the decision to get her to the hospital immediately. The labs showed that she had typhus, typhoid and advanced giardia.  She was hospitalized and is receiving treatment. I felt that God divinely sent our team to her home to intervene in a potentially disastrous situation.

We want to get water filters to many of our families because typhoid is common among the poor. We also need to double-sponsor this family so are looking for another ministry partner to help them monthly. With four children and the level of malnutrition with accompanying medical problems, more food and medical intervention is needed to address the problems of this struggling family.

There are so many more stories I could share with you… some heartbreaking and some encouraging – perhaps those stories will be told in a subsequent post and in our Adoption Ministry 1:27 newsletter. I fell into bed physically exhausted but also energized and grateful to the Lord for the work He has called me to do. I am completely aware that I might be the face to these stories, but it is the faithful partners at home who month after month give of their hard-earned finances and who also take the time to pray for the family in Ethiopia they have adopted. It is because of these generous people that I have the privilege to bring hope to some of the neediest people on earth.  Our Lord will abundantly bless those who give!

“He who is kind to the poor lends to the Lord and He will reward him for what he has done.”  Proverbs 19:17

If you would like to ‘adopt’ a vulnerable family through Adoption Ministry 1:27, please go to our website here where you can view the profiles of many families in need of a sponsor.