It is St. Patrick’s Day at home and yesterday my three daughters and their father ran a race together in Seattle … I hope the weather was nice for them! St. Patrick’s Day and Seattle are a long way off from where I am, not only in distance but in just about every way. Can I share my extraordinary ordinary day with you?

For the past several days I have been in Adama meeting the birth families of children placed for adoption and interviewing birthmothers who are placing their children for adoption. I also was blessed to have a wonderful time with our Widows and Orphans Home director and felt the presence of God helping us work through problems and come out the other side victorious and of one mind. But today, the Sabbath, we woke to a blazing sun that predicted a hot day, and it did not disappoint. We drove to Debre Zeit, about 50 minutes north of Adama, to the Meseret Kristos Bible College where a small international church meets. 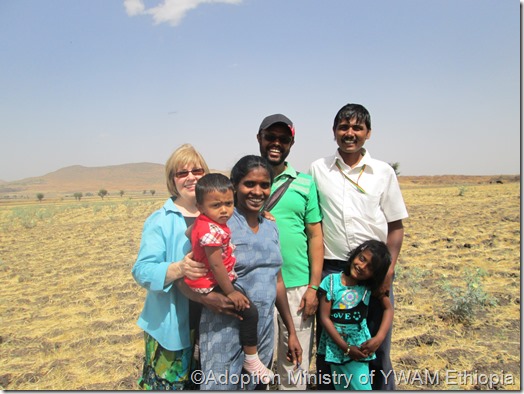 Samy and Ruth and their two little girls live as YWAM missionaries in Debre Zeit and Samy was going to preach this morning. Most of the congregation was White and from Holland; I was the only American, but it was nice to hear familiar worship songs and everything was in English.

After church, we went out for lunch and an Ethiopian brother, Raji, joined us as did Pastor Johannes from Bulbula. We had a leisurely lunch and then Samy, Ruth, their two little girls, Becky and Abby, Raji, Abebe and I headed out of town a ways to farm land where we walked amongst the cows to pray over 20 acres that Samy and Ruth want to buy to establish a YWAM center, school, house of prayer and perhaps a food machine. It was a fabulous time walking the land with the rolling hills in the distance, and Samy’s vision for what he believes God is wanting to do in this was contagious.

“I lift my eyes to the hills. Where does my help come from? My help comes from God, maker of heaven and earth.” Psalm 121:1

Vision. Is it something we conjure up because we want something badly? Is it something God births in our heart and as it grows we start taking steps to make it happen? Do we always know 100% that it is God’s idea or just our own? I had a wise Bible teacher once who said that if we are sincerely praying for direction, the desires (vision) that grow in our heart is His will if it does not contradict God’s Word.

The next part of vision is implementation. Sometimes we allow the practical side of our nature to immobilize us, but that same wise Bible teacher also said that God can direct a moving car, but a car sitting in park is pretty hard to move.

It is interesting to note that while Samy and Ruth were “showing” me buildings and classrooms filled with students, I knew the hard fact that if their work/resident visa doesn’t come through in two weeks, they will have to leave Ethiopia and go back to their home in India. But Samy is not looking at the circumstances. He is standing on the firm conviction that God has called his family to Ethiopia and wants them to establish a school for children as well as YWAM schools to train missionaries. He is not looking at the stark reality that he may be deported and that he has no money whatsoever; but rather he lifts his eyes up to God, because he knows, that he knows, that he knows that that is where his help comes from.

So for the third time in Ethiopia, I stood on a piece of property with other people of faith and just prayed. The other two times were when I stood on what is now the site of our Widows and Orphans Home in Adama, and then again when I prayed over the barren property in Gutumuma on which now stands a school and worship center! As I was praying today, I wondered … what will this look like down the road? How will God bring this to pass? As I climbed back in the van, I felt a wave of excitement for this pioneer work, and if it had been appropriate, I would have danced down the road singing words of thanks to God for allowing me to pray and to partner with Him in whatever He has in mind for a YWAM base in Ethiopia.

As I mentioned earlier, the day was a scorcher and after standing out in the sun praying I was thirsty, dusty and hot. We drove back to Samy and Ruth’s house and Samy stopped and bought a watermelon. Stepping into their shaded house was like an oasis, and the sliced watermelon Samy put out was sweet and delicious, followed up with a cup of tea. It was a good day with my sweet friends and I reluctantly hugged them good-bye, giving kisses to their darling little girls.

As we drove out of the Rift Valley and up onto the plateau where Addis Ababa sits, the air grew cool, the wind came up, and for about ten minutes it poured cool, refreshing rain! I am in my guest house now with no electricity, but the clouds have parted, the wind and rain have stopped, and I am watching the sun go down on this day. God is good!