An Open Door That No One Can Shut! 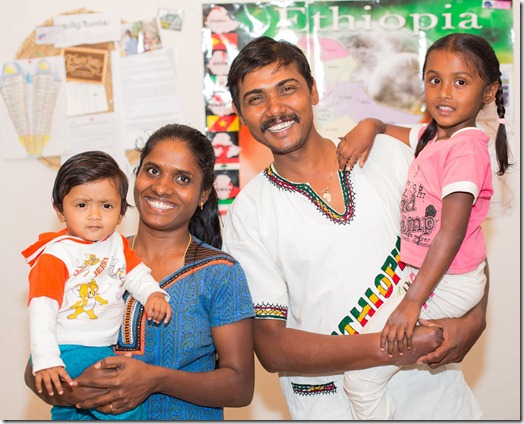 Our dear YWAM missionary friends, Samy and Ruth, have a growing ministry in Debre Zeit, Ethiopia (also called Bishoftu) where they live with their two daughters Becky (5) and Abi (1½). These two gifted servants, originally from India, absolutely radiate the love of Christ!

In 2012, God began to reveal His plan for their ministry in this rapidly growing area about 1½ hours south of Addis Ababa. The first few months of the year were spent in prayer as they sought God’s direction for this new ministry.  Prayer walks were marked out and cell groups have been created to pray that many would be saved.  God showed them several promises in the Word that they were to claim, and He has been fulfilling them right before their eyes, including many coming to know Him, miraculous healings and deliverance from witchcraft.

Samy and Ruth have hearts for evangelism – their greatest desire is to reach others with the good news of Christ’s love through building relationships, meeting needs and teaching God’s word.  They have linked arms with other pastors and evangelists working in this same area with the goal of a united effort to build God’s kingdom.  That work includes training Sunday School teachers and vacation Bible school workers to effectively minister to children in their own churches and villages.  There is a vibrant outreach in the local prisons, where food and bibles are shared, and they have found favor with the Police Commissioner who has invited them come to the various prisons whenever they like.  At Christmas, 200 children received gift boxes in four villages where YWAM is reaching out to share God’s love.  Many in the body of Christ have joined Samy and Ruth in sharing the gospel, even those who have very little themselves.  Shopkeepers, drivers, small merchants and friends have given sacrificially to be a part of this work.

I have set before thee an open door and no man can shut it!   Revelation 3:8

God has given Samy and Ruth lots of big dreams to reach the unsaved in Ethiopia and to disciple them after salvation!

What an amazing example these two servants of God are to all of us!  Several of Adoption Ministry’s mission teams will be linking arms with Ruth and Samy this summer to bring the Good News to Debre Zeit/Bishoftu through children and women ministries.  Some of the smaller teams will also be cooking for prisoners and giving them the gift of a bible.   Thanks to all of you who purchased bibles from our Gift Catalog that will make this possible!
.