“As a mom, I know that mothers don’t give up their children unless they feel there is no other choice; none of them want to. This is absolutely true and I know all mothers would agree with me.”

With a few exceptions, I think it is generally true that mothers relinquish because they feel they have no other choice. However, sometimes a young girl will place her baby for adoption for reasons that perhaps we adults might roll our eyes over. Our domestic adoption agency has worked with several young birthmothers who choose adoption because of plans that I know have little chance of success, but in their minds a baby does not fit into their designs of being the next Olympic champion or a cheerleader for professional football or her goal of being a discovered singer. All of these young ladies could get help from welfare and in a few of the cases parents would help, but those props were declined to follow their dreams. In Ethiopia an adoption choice is not usually made for such esoteric reasons.

Poverty on a level we can scarcely comprehend is not the only reason but it certainly is the biggest reason that some parents in third world countries place their children for adoption. This is tragic beyond words. Being one of the desperately poor in Ethiopia means little food and sometimes very little shelter. If a pregnant mother cannot get enough to eat, her child is born underweight and weak and she cannot produce enough milk to nourish a baby. 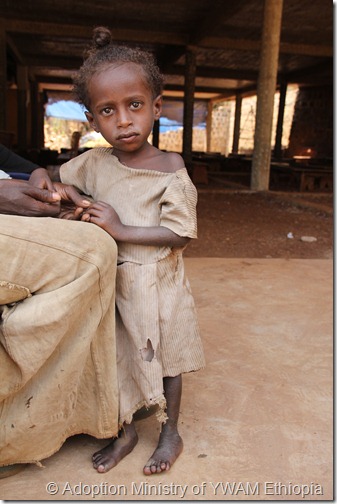 A family identified for our AM 1:27 project was a classic example of this. A mother had a 5-year-old girl that was so malnourished she was the size of a 2-year-old with a haunted face. Even with decent nutrition I doubt very much that this child will ever be normal, physically or intellectually. It broke my heart. When I learned that this mother had twin 6-month-old boys at home, I panicked! 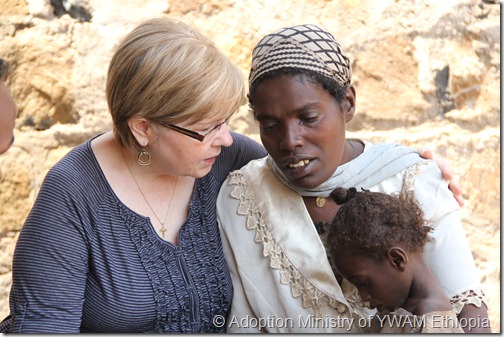 She was sobbing, admitting she did not have enough milk to nurse them and did not know what to do. She had come to ask her pastor to find an adoptive family for them. Thankfully, AM 1:27 could intervene and we gave her formula, bottles and bottled water from our orphanage for a couple of months and stocked her up with food. Because we had a program in place, we found a family in America to “adopt” her family so every month she is ensured food so she can build up her strength and produce enough milk to nourish her little boys. But how many mothers are in this same situation and don’t have an NGO to come to their rescue? How many children waste away and grow up dull and weak because their mother could not get enough food? I would never encourage a mother to look at adoption, but I also would never condemn a mother for doing so. I have thought long and hard about this, and have come to the conclusion that I would move heaven and earth to place my child where I knew he/she would be taken care of if my circumstances were such that I could not provide the basic needs of safety, food and shelter. Wouldn’t you?

A woman will place her child for adoption because she has a chance to marry and her future husband will not accept a child that is not his; I have personally worked with women who have had to make this heart wrenching choice. I have also worked with a few mothers who simply did not want to be a parent at this time in their lives. In Ethiopia and the U.S., there are some birthmothers who have no idea who impregnated them and do not want to do what it takes to raise a child; they do not want that burden. Sometimes they already have a child who is being cared for by somebody else. It is extremely hard for us moms to understand this. Most of us are stable, have husbands, love being mothers and are equipped to tackle the world. But working with birthmothers for thirty years and getting to know their perspective, I understand that this is not everybody’s life or psyche.

Both here in America and in Ethiopia, I hear variations of this amazing statement from birth mothers and fathers that I visit: “This family [referring to the adoptive family] is who I wish I could be. I am glad my child gets a mom and dad like them,” or, (and this one never fails to bring tears to my eyes) “I don’t want my baby to grow up like me.” Over and over again I hear that the mother was raised as an orphan or in the foster system/orphanage or without a father for other reasons, and she desperately wants her child to have a mother and a father. To me, that is placing the needs of her child above her own emotions and making a plan that she feels is the best for her child.

Another young birthmom in Ethiopia wanted desperately to go to school. She herself had no parents and knew that if she kept her baby boy she would never be able to get the education she wanted. Others cannot return to their village with a child. They would be completely ostracized and cut off and certainly no one would ever marry them. One sweet, sweet birthmother’s husband died when she was five months pregnant. She had three older children. She gave the oldest to a neighbor as a servant because she knew he would at least eat. The next two ended up on the streets begging, and when she gave birth to her daughter, she immediately asked that another family raise her because it was already proven that she could not feed the children she had. Absolutely she would have kept her baby girl if her circumstances were different. If her husband had lived, if she didn’t have health problems, or if she had an education or a trade, things would be different. But her reality was destitution and she did not want to watch her daughter die.

We have had many fathers come to our orphanage doors with a limp infant in their arms begging us to take the child because, try as they could, they could not provide good food for their baby whose mother died in child birth. One father fed his baby sugar water for a week (the baby almost died) and another made a gruel of teff (Ethiopian wheat) and water and gave to his baby girl but saw that she was fading quickly. Other women could not or would not nurse another child and the father felt helpless. He turned to adoption to provide for the child he loved.

(At another time, I will tackle the question: “Shouldn’t the parents who find themselves in difficult situations simply put their child in an orphanage for however many years it takes to pull themselves up out of poverty … then bring the child back in their home and finish raising him/her?” It is an interesting proposal!)

Joy Casey started Adoption Ministry of YWAM as a result of her many years working with YWAM’s maternity home, New Beginnings*. NewLife Ethiopia has one orphanage in Shashemene, Ethiopia where abandoned babies found by the police are identified by the government for adoption, either in Christian Ethiopian families or in a U.S. family.
*Over thirty years, 85% of the women living at New Beginnings single parent their children and 15% choose adoption.