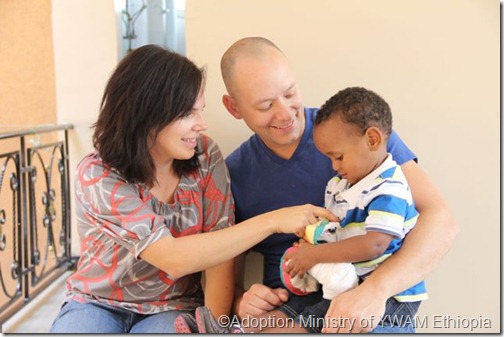 It is a joy to me when I can be present when a family meets their son or daughter for the first time. The moment in time when Mom and Dad first lay eyes on the child they are adopting is a bit surreal. In so many ways it is much like giving birth. The months leading up to this day are exciting and pregnant with anticipation. Parents wonder who it will be that will join their family and what will this new person look like. Will he fit nicely into the current picture of their family or will the paradigm of their family’s structure be changed radically? There are also uncomfortable nights and days when worry about your ability to parent this special child is dominant.

When a pregnant woman is heavy with child, she is hoping that any day will be the day she can give birth and it seems like pregnancy might last forever. So it is with adoptive parents who inevitably become frustrated with the predictable delays in timing. Rationally, both sets of parents know that the end result will be a child and this waiting will come to an end, but emotions nevertheless run high.  Having been “pregnant” for so long, is it any wonder that the day a couple pulls up to the orphanage door is a moment in time that will be etched in their minds forever? 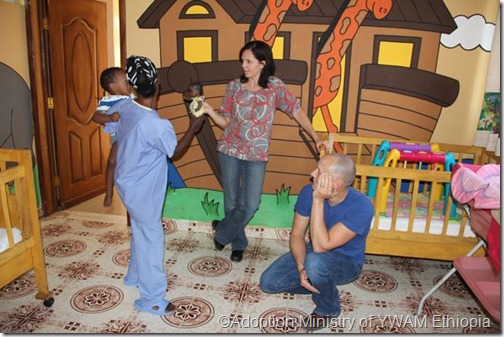 Just a few days ago, I led Aaron and Tina Neiman into the nursery at the Widows and Orphans Home to see their son for the first time. He was in the arms of a trusted nanny and looked skeptically at these strange people. A few of the other children found a familiar leg to cling to as their safe cocoon was invaded by White people with lots of cameras. 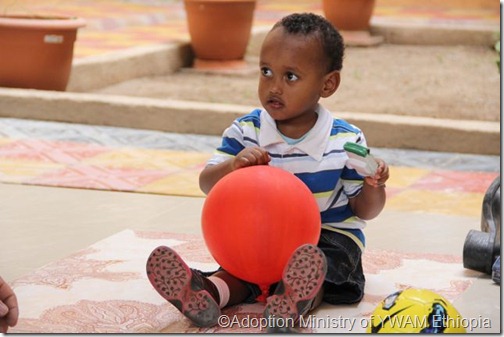 The Neimans are experienced parents and knew that Bebi likely would not warm up to them instantly, and their hunch was confirmed when he would not get one inch away from his nanny. After a few minutes, the nanny, Bebi, Aaron and Tina went into the courtyard with some balls followed by several of the other toddlers. Aaron and Tina began rolling balls to a couple of the more adventurous toddlers and visited naturally with the orphanage director and Jeff Burns and me. Jeff was snapping pictures right and left and taking video for the Neimans so the moments could be documented and left them free to fully concentrate on their new son. 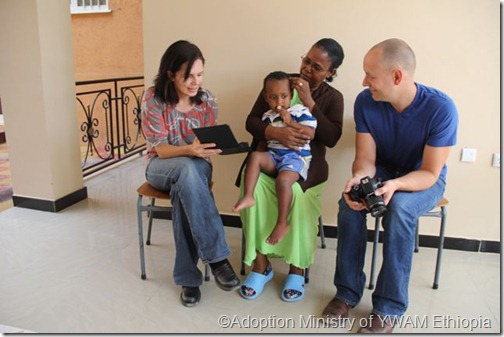 Bebi looked suspiciously on all this activity intuitively knowing that this was all about him somehow. After awhile, Aaron and Tina sat on either side of Bebi and his nanny and played with him while he still felt secure in the familiar lap. Nanny eventually put him down and he began playing with the other children and pretty soon he was having fun playing ball with Aaron and Tina. It was several hours later when Tina gently picked him up and he sat quietly on her lap and then Aaron took him and the ice was broken.  “Hey, these are not scary people at all!” 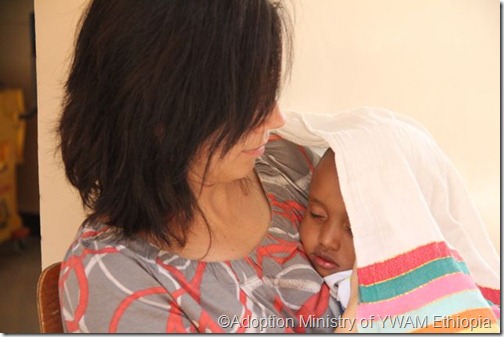 Bebi eventually laid his head back on Tina’s chest and fell asleep. Tina could then study the long eyelashes resting on his soft cheeks, examine every finger, fondle his hair and most likely wonder what kind of man this handsome boy will grow up to be. Eventually, she carried him to his crib and for the first time put him down for a nap. 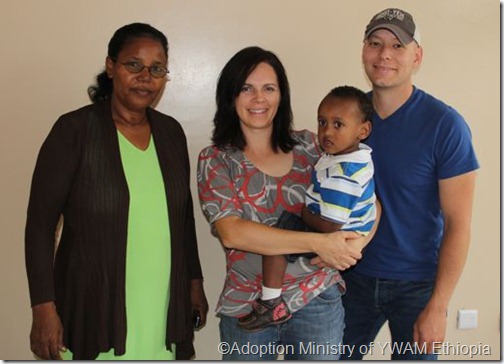 Where the analogy to physical birth and adoption departs is when Tina and Aaron had to say good-bye to Bebi and head back to Addis Ababa. They had an appointment with a judge the next day who would declare that Bebi’s adoption is final and give approval for Bebi to be a forever and ever Neiman. The next time Aaron and Tina will see their son will be when the Embassy issues a visa for Bebi to travel home to America. The immense amount of paperwork that is required for this next step involves many appointments for Bebi, so within a couple of weeks he will be moved from his familiar home in Adama, Ethiopia to CHI’s Thomas Center in Addis. Within three or four months the Neimans will fly back, and this time when they hold Bebi, he will never leave their arms.
.