All You Need Is Love

by Kate Leavengood
I love to throw a good party and a few years back an idea popped into my mind to host an annual Valentines Day event. It would be called “All You Need Is Love” and would change based on our life, commitments and community in any given year, but its purpose would remain: focus outward rather than inward. Although doubtful, I convinced my husband it would be fun, even for him. My previous good idea was to throw a masquerade ball (who doesn’t love a masquerade ball?) so you may understand his hesitation.

After a move to Hawaii, a deployment and our eldest heading off to kindergarten, Valentines Day lurked just around the corner. We brainstormed ideas shaped by the community in Kailua and the friends we thought might participate and eventually settled on a biking scavenger hunt complete with casual dinner and awards ceremony. The winning team would pick the charity to benefit. “All You Need Is Love” teetered on the edge of existence.

Anybody who has an idea knows that it’s just an idea until someone comes along and makes it into what it could be. So it is with our story. We just had an idea. It would have remained so had it not been for the amazing participants.

Our friends arrived in rare form, complete with costumes and their required bikes. Off they zoomed, zipping through our town snapping pictures of the clues and having a grand time. They single-handedly inflated the event with their unbridled enthusiasm, carried it along with their participation and pushed it into the lofty realm of success with their generosity. 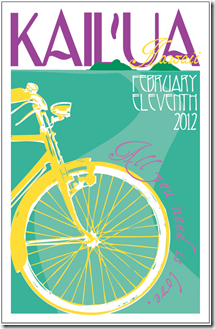 The cherry on the cake was when my ridiculously talented, highly sought after, graphic designing brother donated his time and skills to make vintage race posters as favors. When all was said and done, three charities got face time and one – Adoption Ministry of YWAM Ethiopia – received over $600. Each participant went home having had a great evening on an otherwise ho hum holiday not to mention a piece of art to commemorate their philanthropy.

Who knew our little town of Kailua had so much love to give? Who knew that a silly race for our friends would touch people half the world away? Once the last medal was awarded, the final bike packed up and on its way home, my husband and I looked at each other in happy disbelief. What a gift we had been given by choosing to throw a little party, hoping to spread a little love.

February is behind us and the warm glow of a gift received permeates our days. But the months will click by like playing cards in a bike wheel and before you know it, the day of love will be just around the corner. Did I mention I just learned how to make masquerade ball masks?

Doug and Kate Leavengood live in Kailua, Hawaii where Doug serves in the U.S. Navy.  They have two children and a lot of really awesome friends!  Thank you both so much for blessing this ministry through your creativity and hard work!  That $600 will go a long way to provide support for our orphanages in Ethiopia.
.