One of our wonderful adoptive dads, Brandon Monahan, told us a story that’s just too good not to share with you.   I never cease to be amazed at the generosity of so many people!
Kassandra and her husband have been facilitating a Dave Ramsey Financial Peace class.  Because they were in a leadership role, they felt they should carefully follow the guidelines suggested in the class.  One of the foundational steps is to pay for your purchases with cash, using an envelope system to divide it into spending categories.  Kassandra was a little nervous about carrying cash but did it anyway. 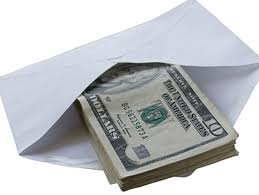 One night when they were out to dinner, she accidentally left her purse at the restaurant – with $800 cash in an envelope inside.  By the time she realized what she’d done, the restaurant was closed.

After what I’m assuming was a fitful sleep, she got up at 4:00 am and traveled 45 minutes to the restaurant.  I imagine prayers were being said during that whole drive!  The purse was there, all right, but the cash was gone.

Kassandra was understandably upset but she went to God with her feelings and, although she said she knows you shouldn’t make deals with God, told Him that if He brought back the $800, she would give it to help provide formula for orphaned babies (which she’d heard about through the Clothing is Optional – Formula is Life program via Heritage House).  And God decided to take her up on her offer!  The money was found.

Kassandra called Brandon who works for Heritage House, to help her place an order for 10 cases of Parent’s Choice milk-based formula.  Heritage House has helped raise money for formula for YWAM’s four orphanages in Ethiopia.  The formula will be taken to Ethiopia with one of our families hoping to travel soon for their Embassy appointment.

Here it is, all ready to go!

We’re so grateful for the giving hearts of God’s people.  Thank you Kassandra!!