We wanted to put on your radar an upcoming made-for-TV film that carries a great story and significant, positive messages surrounding adoption, sacrifice and other important themes.

It’s important to remember that if films like this aren’t well-watched, producers quickly turn their efforts back to the push-the-envelope-as-far-as-they-can programming. What TV executives and advertisers care most about is simply the number of watchers. Essentially, every viewer is a “vote” for TV programmers to produce more of the same. If quality programming generates viewers, TV stations will deliver more quality programming.

Sadly, what passes as “family friendly” TV often draws its appeal more from what it doesn’t have (sex, violence and profanity) than what it does have (thoughtful scripts, good acting, etc.) That’s not the case with “Change of Plans.” It’s not likely to win an Oscar, but it is a well-written, well-produced program…well-worth watching. Below is a post from the Christian Alliance for Orphans blog today, which also contains a link to the movie’s website. 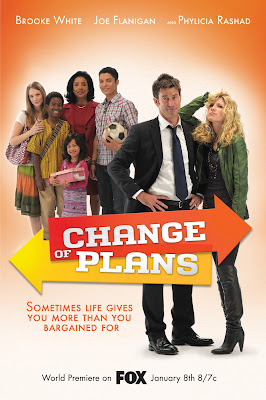 A new made-for-TV movie slated for showing on January 8 explores adoption, sacrifice and life priorities in a way very few films today do. “Change of Plans” tells the story of a young, jet-set couple whose all-too-perfect lives may be irreparably altered by four orphaned children. I had the chance to preview the director’s cut this week and came away inspired and thoughtfully challenged.

When Sally Danville’s (Brooke White of American Idol) best friend from college dies in tragic accident in Africa, she leaves behind four children—three of them adopted from countries around the world. Sally and husband Jason must now grapple with choices that will shape the rest of their lives. Step by step, the couple realizes that for every inch they open their hearts and home to the children, the plans they’ve mapped out for themselves will likely be lost forever.

The film gets its strength from the underlying story and real-world decisions it represents for each of us. The acting, music and script are not Oscar quality, but still solid. Many adoptive families and others involved with kids in the foster system will likely see parallels with their own stories as well. The widows the story offers into the potential challenges of adoption and foster care are perhaps understated, but not absent: it’s clear that to welcome a child into our home is not a cost-free choice.

Refreshingly, this movie earns its “family friendly” identity not merely by cutting out sex and violence, but by delivering a thoughtful challenge to some of the great lies of our era. Most narratives today, from commercials to movies, implicitly argue that fulfillment is found in getting what we want. “Change of Plans” points in the opposite direction, helping us see that real life is only found by embracing the inspiring-but-costly invitations God puts before us.

If your evening January 8 is not already booked, I’d encourage you to spend it enjoying “Change of Plans” with your kids or a few friends. Doing so sends a message to TV producers and advertisers that there is, after all, a market for quality programs. More importantly, the story just may provoke a change in your plans as well.

**We have not prescreened this movie so we’re not endorsing its content.