One of the sweetest moments of my life…

.
written by Dinah Monahan, from Ethiopia
Mike and Dinah have started the Living Hope Maternity Home in Adama 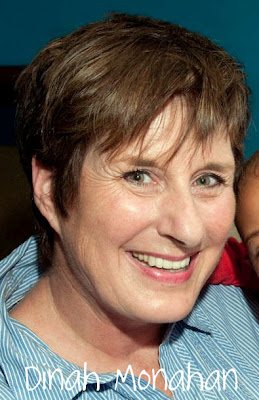 We arrived with our 420 lbs of luggage Sunday night after an easy flight.  Ambi*n is wonderful. I slept most of the way and, amazingly, was able to sleep again that evening we arrived in Addis. The next day, rested and ready to go, we joined Kara and her mom Donna from Into the Streets of Ethiopia (who we had networked with and who had so graciously brought things for our project) and we went to see Abdissa at the YWAM Children’s Home.  Seeing Sammy, Ruth and Abdissa was like a homecoming. 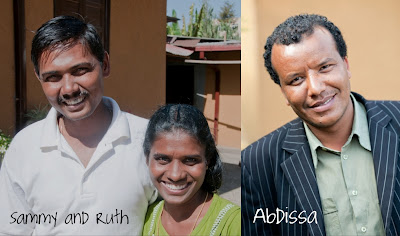 While there, Abdissa arranged for us to meet Helen. Helen was the young woman who was pregnant and had a child and had been unable to even do the most menial labor because of a broken arm that had healed badly. The second pregnancy ended her only source of income, which was prostitution. Utterly desperate and unwilling to watch her child starve, she tried to kill herself three times… poison and hanging. God brought her path across Abdissa’s and he shared what must have sounded like a hollow promise (or maybe a come-on from a stranger)…that there was a God who cared.  But he was also kind and gave her food out of the little he had and she came back. Each time, he spoke of God’s love. 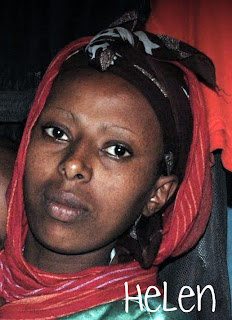 When we came last time, he shared her plight and it was what God used to open Mike’s and my heart to opening the maternity home. This trip, I was able, through an interpreter, to tell her that story. I told her that her life has purpose and that God had used it in a mighty way. I told her how it had so moved us that we knew that He wanted us to make sure other mothers in her situation did not have to face such desperation and so we opened the first ever maternity home in Ethiopia. It was too late to help her but we also, through friends at home (Heritage House and clinic staff), made sure that she was taken care of. She was so overwhelmed, she buried her face in her precious baby’s shoulder and wept. Helen now must face another challenge… she may have cancer. Please keep her in prayer.

She brought with her a beautiful girl with huge eyes who looked like she was twelve. In reality, she was 15. She was dressed in rags – a  t-shirt that was ripped in many places and hung on her and a skirt that had holes and was dirty. On her lap was a baby who I thought was maybe 6 months but was actually a year. He was a flirt… peeping out from under his blanket at Kimberly and I and beaming, then diving back under for the safety of mommy. Samrait lived on the streets with her baby. She is illerate. She was hungry and her baby was sick. Helen led her to Abdissa. And he, who has the kindest heart in this land that could overwhelm the hardest one, put her in the guest house they keep for out-of-town people and has a female staffer ministering to her.

As Kimberly and I sat there watching her chew her thumb and look at her lap in the face of we two white women, we had the same idea. “Let’s take them shopping!” I said. I asked Abdissa to ask them if they would like to go shopping for new clothes, not wanting to cross some boundary or make a cultural gaff.  He looked at me like I was stupid and said, “Is that a joke? Is that a joke? They have never been shopping. Of course they want to go shopping!”  They thought it was for their babies but we quickly established it was for them. I think Kimblerly will agree, that was the best shopping trip we have ever been on in our lives.

Samrait especially was overwhelmed. I do believe she had never had this experience. She bought a pretty flowy skirt. Abdissa suggested a practical top but she eyed one with bling, white sleeves and a hood – very cool. She ran her hand over it while it was on the mannequin and I told her to try it on with the skirt. The truth is, it didn’t match one bit, but in it she was a princess! Helen was very practical, choosing a jogging suit. Next came shoes. Samrait chose what I feared would be a terrible choice – shiny black shoes with a darling bow on them. But when I looked at them I was so pleased to see that they were Pum*s and had as good a sole as a tennis shoe – these would give her long wear and comfort. Helen again was reasonable, choosing tennis shoes. I think Samrait’s hug and her “thank you,” which was so full of awe and gratitude for something that she never in her entire life dreamed possible, was one of the sweetest moments of my life. You will be hearing more of these young ladies and the three young mothers God has brought into Abdissa’s care as we figure out a way to help him feed them and their babies. So little goes so far here. 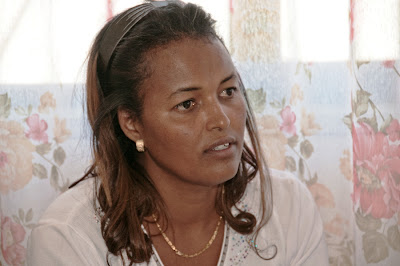 Yesterday we went to Adama and our Living Hope Maternity Home. The girls and staff were out waiting for us and what a reception! It was so amazing to come back six months after we had talked to these precious women and find a well-run home and six girls. The director, Meseret, is a truly amazing servant of God. She is also an ardent defender of Ethiopian unborn babies. Two of the girls in her home are there because she stood outside the hospital, which does abortions (even though it is not technically legal), and talked to the young women. When they changed their minds, they knew that the price for doing so was to be kicked out of their families with nowhere to go. She brought them to the home. You cannot imagine how excited she was to see all of the educational materials we brought with us, including fetal models, graphic brochures with fetal development and of course “Precious Feet.” 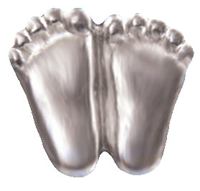 Today we see our precious grandbaby in the orphanage. Can’t wait to hold him…if he lets me, that is.
(Mike and Dinah’s daughter and son-in-law are adopting a baby boy from our orphanage – they even got to bring him from Gimbie to Adama before they knew he would be their grandson!) 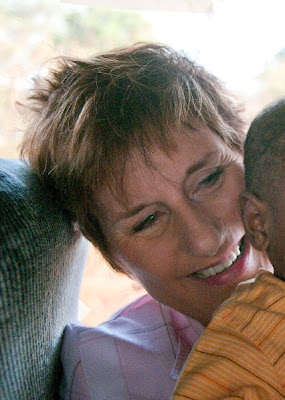 So much to do on all our parts but this has already be a wonderful journey and God has blessed it in amazing ways. Keep praying for health and stamina. Luv ya all!