Clothing is Optional – Formula is Life!!

In March, my husband Mike and I went to Ethiopia. For Mike, a man who likes to nail down every detail of life, going to Ethiopia just didn’t fit. We knew of the amazing work of YWAM through a childhood friend who was involved with Adoption Ministry of YWAM Ethiopia. We wanted to see the orphanages and the other work there and bring the story home to our small church. But the truth was, when someone asked us “Why are you going to Ethiopia?” a week before we were to leave, we looked at each other and said, “Why ARE we going?” But we did go and it changed our lives forever.

We connected with Joy Casey, the director of YWAM’s Adoption Ministry in Ethiopia, who allowed us to tag along as she did her “rounds” of three of YWAM’s four orphanages. Two of the orphanages – one in Nekemte and one in Gimbie – were inland on a road that was a washboard on steroids and potholes that you feared you would not be able to climb out of. While the scenery was beautiful, complete with baboons and a twelve foot python, the trip was twelve jaw-jarring hours.

When we arrived at the orphanage, we of course snatched up the babies. My heart went out to one in particular, a very malnourished two month old little guy named Baby Z. You could count his delicate ribs and his arms were so skinny they would have fit a large ring on them. His huge eyes locked onto mine and my heart was his. He has started life two months early and because of lack of nourishment, was having a hard time catching up.

Before we left, I had asked Joy what they needed. “FORMULA” was her emphatic reply! Looking at our allowed weight limit, we decided to take few clothes and LOTS of formula. Our church filled three large suitcases with 90 cans of formula and baby food. We were worried that the Ethiopian customs would question and even confiscate it. Our fears were heightened when we saw that our suitcases went through x-ray machines. I can’t imagine what all those metal tops and bottoms looked like! But they went through without a sideways glance! I’m sure our church’s prayers back home helped on that one! 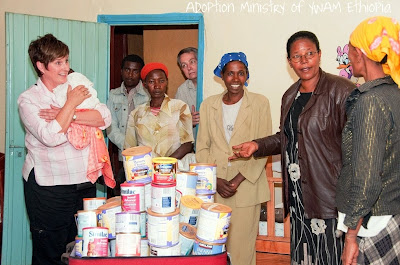 Standing in the baby room at the Nekemte orphanage, surrounded with eight small babies, I spied about ten cans of formula. I pointed them out to Mike, saying, “They seem to have a supply.” “No,” he said, “they are all empty but one, and it is only half full.”  I can’t tell you how excited we were to open our suitcase of formula, some of which was high potency for preemies. When we went to the orphanage in Gimbie, the situation was the same. Tezera, the director of the Widows and Orphans Home in Adama, said it very well when she said, “Formula is life for these babies.” Indeed, Baby Z is a testimony to this. I saw a picture of him three months later and I could not recognize him. He was actually chubby! 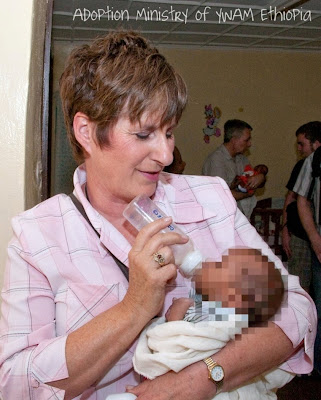 “What do they give the babies if they don’t have formula?” I asked Joy. “Powdered milk,” she said, “which does not have enough fat or nutrients for them to thrive.” We realized the desperate need for a steady supply of formula for these babies but the cost of shipping it was prohibitive. But, as Joy talked about work teams and couples coming from the states, I realized that they could do what we did… bring it in their suitcases.

Our program, “Clothing is Optional, Formula Is Life” was born. We ask people going over to fill at least one of their suitcases with a 50 lb. limit of formula – more if possible. They really don’t need many clothes as they can be laundered in the hotel for very cheap. As God is the great “dot connector,” He had provided the Crisis Pregnancy Center I direct with a pallet of formula that was quickly expiring. There was no way we could have used it all so this was perfect. (It is good for a year after expiration date.) Since we own a mail order business, we simply send the formula to whoever is leaving for Ethiopia to be packed in their suitcases. Since April, we have sent close to 400 lbs. of formula! We have many more families going. The program is so successful that we quickly ran out of formula!

I started calling around but to no avail. But God is, as usual, way ahead of me. He connected me with a woman named Kristen who has a blog called We Are THAT Family. She has thousands of faithful readers. She put the word out and it has exploded! Other bloggers picked it up and we found ourselves with over 1,000 cans on the way and close to $3,000 in donations to help with shipping costs. Now there is talk of a baby formula company providing many pallets a month. Amazingly, we have just doubled the size of our warehouse! So, as it looks now we have lots of formula. We want to start sending it over in small batches to each of the orphanages on a regular basis. And we will continue to send it with everyone who goes to Ethiopia!

As for the reason we made the trip? Well, it wasn’t the formula. In our eleven days there God made it clear that he wanted us to start a maternity home in Adama  We now have the home, four of the six employees and are poised to open in October!

WHAT AN AWESOME GOD WE SERVE! When you really let go He takes you on a crazy and amazing ride in life that you never dreamed would be possible!

Formula truly is life for these little ones.  Adoption Ministry of YWAM Ethiopia is beginning a partnership with Into The Streets of Ethiopia, so that through the help of Dinah’s ministry and Kristen’s blog readers, people are stepping forward to provide formula for our babies!  We are incredibly grateful for the generous response of so many!