Four Reasons Why We (and you) Serve The Fatherless

The Christian Alliance for Orphans‘ yearly Summit has become a national focal point for Christians committed to adoption, foster care and global orphan care.  In April of this year, Summit VI was held in Minneapolis and over 1200 orphan advocates from all over the world gathered.  Here is an excerpt from an article written by Jedd Medefind, President of Christian Alliance for Orphans.  I think it provides a very succinct and well-worded answer to the question “Why are you involved with orphans across the world?”  He begins by describing the Summit gathering in April…

At moments, the ethos and interactions felt almost electric. As one band leader expressed, “It felt like that was the first time I’d been worshipping and every person in the room was really a Christian.” I understood what he meant. From families with adopted HIV+ children, to foster parents, to individuals serving the fatherless around the globe, the spirit of that community carried the feel of the early days after Pentecost.
As best I can discern, here are four key reasons why:

Caring for orphans reflects the heart of God. From Isaiah’s call to “defend the cause of the fatherless” (1:17) to James’ placement of orphan care at the heart of “pure and undefiled religion” (1:27), the biblical mandate is clear. But this is not merely God’s expectation of us; it is a mirroring of His own character. “He defends the fatherless,” declares Deuteronomy 10:18. Describes the Psalmist, “He places the lonely in families.” To be like our heavenly Father, we’re invited to do the same.

Caring for orphans makes the Gospel visible. At the heart of the Christian story is the God who pursued us when we were destitute and alone. He adopted us as His children, and invites us to live as His sons and daughters. Perhaps nothing makes this truth more tangible than when Christians follow in their Father’s footsteps, opening heart and home in unconditional affection to the child that has no claim upon them but love.

Caring for orphans defies the gods of our age. Darwinism’s sole ethical imperative is to ensure one’s own genetic material carries forward. So like Gideon tearing down his father’s idols (Judges 6), we assault this dictate when we seek to ensure the survival, and thriving, of a child that does not share our genes. Meanwhile, the purposeful sacrifices required to love this child flout the demands of other gods also, from materialism to self-actualization to comfort. The cost must be counted. But—compared to the depth and richness found along the path of caring for orphans—these false gods are shown to be as lifeless and unsatisfying as statues of bronze or wood.
Caring for orphans invites a journey of discipleship. “I see these kids changed,” explained a woman who helps Christians get involved with foster care, “But I think the parents are changed even more.” It’s true. Every family I know that’s opened themselves to parentless children has not gone unaltered. And though the road can be hard, even painful, virtually always it leads closer to Jesus. Expressed one adoptive mom recently, “People have said, ‘Oh, aren’t they lucky, you rescued them from whatever.’ And I think, Are you kidding? I’m the lucky one. I get to be their mom. And I get to be daily rescued from my selfishness, and my impatience, and things that are just as disease-ridden in my soul.”

Close friends from Washington, DC, Tom and Leah, adopted a little boy from an African nation two years ago. He’d been found, abandoned, at the edge of a forest, umbilical cord still attached. “He was left for the hyena,” described the old woman who discovered him when the newborn’s cry startled her milk cow.

When I heard that story, I couldn’t help thinking of the early Christians, going outside the city walls to take in abandoned infants. I feel the same about what’s going on in Colorado, where so many Christians have adopted from the foster system that the number of children waiting for adoption has been cut from nearly 800 in 2008 to just 365 today. The same goes for countless partnerships between U.S. Christians and churches abroad to care for orphans within their home countries as well.

Christians are again becoming known as a people who defend the cause of the fatherless. As we do, the world won’t be left unchanged. Neither will we. 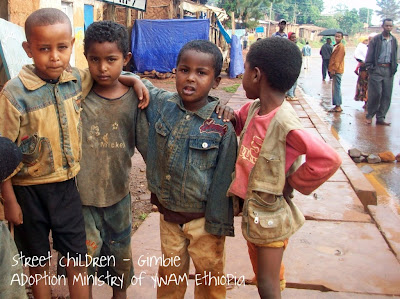