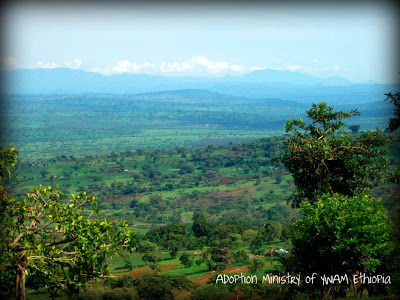 Today is Thursday morning. Four days ago, Sunday, we loaded up our 20 passenger bus with Mike and Dinah Monahan from Arizona (Just Love Them Ministries), Elias Nichols from Washington (16-year-old son of a dear friend who has adopted two Ethiopian children), Mark Wolbert (Adoption Ministry’s Missions Director), Wick Nease (a YWAMer running Streams of Mercy), Nathan (a professional photographer traveling with Wick), Tezera (our Widows and Orphans Home Director) and me! Ten hours later, over incredibly bumpy roads but having seen herds of baboons (what are groups of baboons called, anyway? I don’t think it is a herd …), monkeys and a 22 foot long python (thankfully killed by villagers), we drove into the thriving city in Western Ethiopia called Nekemte. There is a pretty decent hotel there and all were hungry and tired, so just Tezera and I headed over to the orphanage that we painted, cleaned and readied last December.
Imagine my satisfaction in seeing this nursery operational with nannies tending to seven tiny babies. One baby girl was just 3 days old, another 5 days old, one was 12 days old and one little miss was one month old. The little preemie baby boy I had been so worried about was out of the hospital and while I wouldn’t call him robust, was doing fine – although I have never in my life seen such a skinny baby. He was awfully cute, though, and was alert and loved to be held and talked to. Another little boy was 3 months old and looked huge next to all the tinies and another little girl just a couple of months old. Four of these babies we would be picking up and taking back to our Adama orphanage when we returned.
I was quite taken with the 3-day-old baby girl who didn’t even have a name yet. She had been in our orphanage for 2 days. She is exquisite! Delicate features and huge eyes with downy soft hair …. she was perfect in every way. The fact that she was alive was a miracle. Three days before, her mother gave birth to her in the jungle area outside Nekemte and walked away. An old woman was gathering sticks for a fire and came upon the newborn baby who was all bloody with the placenta laying beside her. The old woman picked up the baby and took her to the police in the nearby town. The police immediately called our social worker to come and get her because there could be no delay in getting her help. Now I am holding this precious lightweight bundle and I know that she will bless the lives of a family in America …. and I hope it will be soon!
After spending a day in Nekemte, we left early for Gimbie where we have another Widows and Orphans Home. We have 11 children here. Eight of the babies have been waiting for the Ministry of Women’s Affairs to open so we can get their documents finalized for adoption. Five of them are already matched with incredibly patient families and it is such a joy to know that now we can process them and they will finally be settled. We took pictures and video of the children but were a bit rushed because we had some very important meetings with some government officials that always take a very long time.

Two abandoned little ones would be traveling that evening back to Nekemte with us (and then on to Adama): a 1-month-old beauty with soft curls all over her head and a baby that Dinah Monahan affectionately dubbed ‘Charlie Brown,’ who is 9-months-old but came to us extremely malnourished. His mother died shortly after birth and his father tried to keep him alive by giving him flour and water. Although teff flour is nutritious, it is not near enough for a new baby to adequately grow on. Our staff immediately hospitalized him where he was put on IV’s and a formula specially made for malnourished infants. Now he looks very good and is he CUTE! He has a personality to die for and is soooo responsive with a smile for everyone.

After grabbing a bite to eat, meeting with endless city officials, and having a short time with my missionary friends, Scott and Monica Barlow (Scott will be traveling back to Addis with us), we picked up little ‘curly head’ (she reminds me a Tiny Tears doll I had as a little girl …) and ‘Charlie Brown’ and traveled back to Nekemte to get a few hours of sleep.
Five a.m. came very soon and we loaded the bus destined for the orphanage to pick up six babies. The bus wouldn’t start. Half an hour later the bus was pushed out of the parking lot just enough to jump start the battery and off we went! The air at five in the morning is refreshingly cool and we handed six bundled babies to six waiting arms and drove through the streets of a town just waking up. While watching the sun rise over the hills with the now 4-day-old baby nestled in my arms, I thanked God for allowing me this day, to be in this place, doing His work.