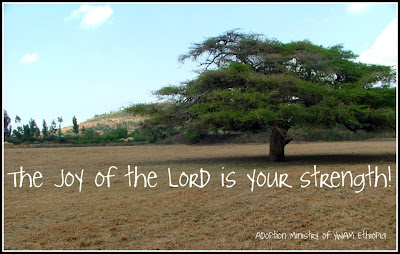 Joy Casey, Adoption Ministry Director, is in Ethiopia and sent us this summary of a day spent in the tiny village of Gutumuma.

Down the main road about two hours, winding through a little town dodging children, goats and donkeys, and then following a very narrow path about another hour more, we came to the small village of Gutumuma. The houses are round stick and mud huts with pitched thatched roofs or square stick and mud houses with a slanted tin roof, but our vehicle drove past those and came to rest by a huge over-reaching tree. In the shade of this magnificent tree were about 100 men, women and children clapping, dancing and singing songs of halleluia to their Savior. Their worship was so joyful it was contagious and we Americans later commented that the “joy of the Lord” took on a whole new meaning for us. We came to this small dot on the map to see what God has done in this remote village that, until just recently, none of us had heard of. This is not just another typical village. More than eighty miracles have happened there over the last ten months.

Watch and Pray is an organization spearheaded by Getanah, an Ethiopian who knows there is a spiritual battle for the hearts of his countrymen. Abebe, Adoption Ministry’s representative in Ethiopia, has been laboring beside Getanah for seven years in several villages in this area, sharing the truth of Jesus and also building houses for the poorest as money was donated. Little by little, the Good News has started to permeate the lives of these villagers and over the past ten months, eighty families have turned to walk hand in hand with Jesus Christ. The joy on their faces as they unashamedly praised their Savior was a sight for sore eyes.

As anywhere in Ethiopia, the children are magnificent and easy to engage. They laugh easily and are eager to have their pictures taken. The children, mothers and most men were barefoot, wearing little more than rags. After spending time with the new converts, we headed across some fields to a piece of property that the government gave the village to build a worship center and kindergarten classrooms for the younger children to attend school. There is a school for the older children already but nothing for the kindergarten age …. and there are a lot of children! The elders of the church met us there and we were impressed with the beautiful setting and large, cleared area where we could easily envision a church, school and large playground. These people are sustenance farmers and are literally dirt poor, but they have come to know God and are used to miracles. He has started a vibrant Christian church – He will also provide. We formed a large circle holding hands and prayed that this church and kindergarten will become a reality.

This house might not look like much to our Western eyes, but to the people of this village, it is better than anything they have ever had. Watch and Pray has been giving $300 for the building of a new house for these poor people, and their obvious pride of ownership is heartwarming. Finances are limited, however, and only a few have benefited from a sturdy house.

$300. With a twinge of conscience, I realized I spent that on new clothes just recently. These people are barely clothed and have so little. I vowed to raise money, starting with myself, to see many more houses provided for this village. The leadership of this village appears to be very strong, but I am sure there are many challenges to these people who have turned their lives to understand the forgiveness of Jesus. The Church needs to show these people support in a tangible way. James expresses quite clearly our responsibility: Suppose a brother or sister is without clothes and daily food. If one of you says to him, “Go, I wish you well. Keep warm and well fed,” but does nothing to help his physical needs, what good is it? I will start by helping one poor family build a new house – “Habitat for Humanity” African style! I can do that. Others will join me and together we can show our faith by our deeds to these new converts.