I hope many of you have made it a priority to read Melissa Fay Greene’s book “There Is No Me Without You.” It’s a book that every family adopting from Ethiopia should read. It is the story of a middle-aged Ethiopian widow whose home became a refuge for hundreds of orphans. Melissa knew Haregewoin Teferra and wrote this beautiful and heart-stirring story of her heart for Ethiopia’s children. If you haven’t read it – even if you’re not adopting – please get it from your library or bookstore.

On her blog, Melissa posted a wonderful response to a letter from a woman considering adoption from Ethiopia…

Dear Melissa:
I am greatly touched by your experiences. My husband, my six year-old daughter and I would love to adopt from Ethiopia, but our social worker thinks that a child from Africa would not feel comfortable in our Southern California home because there are not enough black children in the neighborhood, although I know of at least five families with adopted children from Africa… beautiful, warm, well-adjusted children. Is love not enough?
Thank you for your time and consideration, SG (who gave permission to publish)

My reply:
I think love gets you most of the way there, but connections with other people of color, especially with Ethiopians, are vital.

Picture an over-turned world, your six-year-old daughter orphaned, all extended family gone, a kind couple with one child from central Ethiopia adopting her. There are no Americans, no white people at all in the village, but they are a kind and loving couple that says color doesn’t matter to them. “We’re color-blind,” they say.

What would you want for your daughter?

You’d want her to be adopted by these people, rather than grow up alone in a California orphanage. But perhaps you’d be grateful if the couple would search out Americans in the vicinity; hire an American babysitter to speak to your daughter in English and prepare Pop Tarts and macaroni-and-cheese and bring over Sesame Street videos…

Read the rest of the letter at Melissa’s blog here. 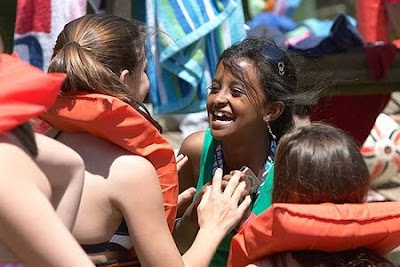