Here is an edited version of an article that appeared in today’s edition of the Arizona Republic newspaper about the other YWAM family who was on the Christmas flight from Amsterdam to Detroit, the Tober-Halvorsons. Their faith in God’s sovereignty is a great testimony, as you’ll see in this article.

Please continue to pray for each of these dear family members and for all of the people affected by that incident. 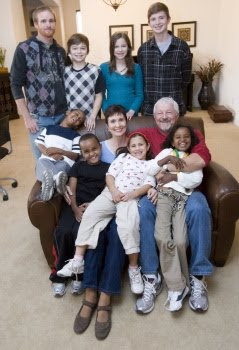 The Halvorson family was taking three newly adopted children to their home in Buckeye on Christmas Day, minutes away from the plane touching down in Detroit. The soft hum of the engine suddenly was disrupted by a loud pop. It was the sound of a terrorist attack on Northwest Airlines Flight 253.

“I saw a stewardess . . . turn around and kind of ask herself, ‘What was that pop?’ She was looking around, and then she started sprinting into action,” said Tim Halvorson, 26. “Then I saw people on the right side of the middle section start to stand up and that’s when I stood up. Then, we started hearing all the commotion, the screaming, shouting. It was like a movie. It really was.”

As the sounds grew louder, the family, which was in the back of the plane, became even more frightened. “You’re hearing stuff and you can’t really see it,” Halvorson’s stepmother, Kristen Tober-Halvorson, 47, said in an exclusive interview with The Republic. “It was as if you heard babies screaming in the distance, and it was like a wave of sound coming closer to us and we didn’t know what was coming at us.”

A flight attendant ran to the back of the plane, grabbed a fire extinguisher and sprinted back to the front. The family smelled smoke.

“We thought maybe it was an electrical problem. We still didn’t know someone had done anything,” Tim Halvorson said. “We just knew there was a fire and there was smoke that we were smelling, and that pop. We didn’t know what (was going on).”

Minutes later, panic turned to calm and the plane made an emergency landing at the Detroit airport. The Halvorson family, with the three young children they were bringing home from Ethiopia, was safe on Christmas Day…

The Halvorsons had spent the last week in Ethiopia, where they picked up the children whom Kristen and her husband, Glen, were adopting: Asher Bilisuma, 6, Grace Mihret, 7, and Benjamin Tesfaye, 8. Glen Halvorson, 62, stayed behind to care for the couple’s two biological children, daughter Taylor, 13, and son Dustin, 11, and another adopted daughter, Blanca, 7, from Guatemala.

Kristen, stepson Tim Halvorson, and 15-year-old T.J., the couple’s third biological child, were excited about bringing home their expanded family as they left Ethiopia on Christmas Eve.
They also were exhausted. The trip had been filled with excitement, and their journey home had kept them awake for about 35 hours. They’d stopped in Sudan, Amsterdam and were on their third leg to Detroit, their final stop before flying into Phoenix… The children, who still are learning English, didn’t know anything was wrong, something Tober-Halvorson is “unbelievably grateful” for.

As the incident was happening, Tober-Halvorson said she wrestled with God. She and her husband felt God led them to adopt the three children, but it seemed their life with their new family was going to be cut short. “I was arguing with God, saying I don’t quite get that, and I just prayed that he would have mercy on my family,” she said. “But I (also) felt total peace. I really didn’t think anything was going to happen to us.”

…The five-hour delay caused the Halvorson family to miss their flight back to Phoenix. They had to spend the rest of their Christmas in a hotel room in Detroit, tired but grateful. They arrived in Phoenix the next afternoon, and were greeted by Glen Halvorson with hugs and kisses.

There has been little negative impact on the family. Tober-Halvorson, a stay-at-home mom who home-schools her children, said she has had trouble sleeping, but otherwise hasn’t been dwelling on it. Neither has the family. The new children have bonded with the family and spend the days playing with their new siblings. They wrestle, ride bikes and scooters and play games. Laughter and squeals of joy echo throughout the family’s Verrado home, where they have lived for 18 months.

Glen Halvorson, a doctor, said the family hasn’t been shaken thanks to their faith and the support network they have in their church. The family attends Desert Springs Community Church in Goodyear. “It’s more of a positive thing of just praising God that we’re safe. It just makes me appreciate my family more and just not (want) to waste any time with them,” Tober-Halvorson said. “God is in control of everything. Honestly, nobody knows how long they have.”
(Here is a link to the complete article. You can also read another article about the Keepmans’ faith in the midst of this ordeal published here.)