Most of you have heard or read about the attempted terrorist attack on the NW Airlines flight from Amsterdam to Detroit last Friday. Two of Adoption Ministry’s families were on that flight, bringing their children home from Ethiopia. Both of these families are very aware of God’s presence and protection on that airplane and both were able to keep their children calm and virtually unaware of the situation unfolding on the flight. We’re praising God for their safe return!

I’m reminded again of the spiritual battle we enter when we’re ‘defending the fatherless and the oppressed’ – which is really what adoption from Ethiopia is all about. Please be praying for these two families – and all the others who were on that flight – that God’s peace would rule in their hearts and minds.

Below is a story about one of the families that appeared in the Milwaukie press: 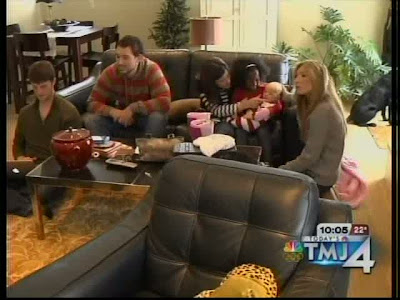 OCONOMOWOC – An Oconomowoc family is grateful to be alive after flying on a plane that a terrorist allegedly tried to blow up. At the Keepman family house in Oconomowoc, the mood was much different Saturday than it was on Christmas Day.

“God was protecting us, it was a true miracle,” said Richelle Keepman. Keepman along with her parents, Charlie and Scotti were flying home, about to land in Detroit when they heard what sounded like a balloon pop.

“And all of a sudden we heard screams from the front of the plane because we were in the way back,” she said. A partition blocked their view, but they began to smell smoke and continued to hear people screaming. That’s when they saw flight attendants running to the front of the plane.
“It was when they ran to get the fire extinguishers. I think we all saw the terror in their eyes and knew this is it,” she said.

So they all held hands and began to pray. Moments later, they landed unharmed. “It really is a Christmas miracle. I think this man’s true intent was to blow up the plane,” said Richelle.

The Keepmans are happy to be home not only because they avoided this apparent terrorist attack but they brought home two very special Christmas gifts. Their names are 8-year-old Ytbarek and his 6-year-old sister Arsema. They were on the plane too. The Keepman’s had just adopted them from Ethiopia and were bringing them home for the first time.

“If something was going to happen I was not going to let them know it was going to happen. When the flight attendant was running by I told them it was a joke and laughed and they thought it was funny,” said Scotti Keepman. And they were still laughing Saturday as they played in the snow for the first time in their lives making snow angels.

Now that their home safe and sound, their family believes they all had an angel of their own.
“It’s a dream. I could cry because this is what I hoped and prayed for,” said Scotti.

(Here is the link to the tv station webpage and a video.)