Helping the poor and needy

Joy Casey, director of Adoption Ministry, is in the Gimbie area of Ethiopia where she is working at our newest Widows and Orphans Home. Monica, a missionary mom who is living near the orphanage, assists YWAM in many ways and has cared for many of the babies now available for adoption. Monica sent us the following glimpse into her daily life. 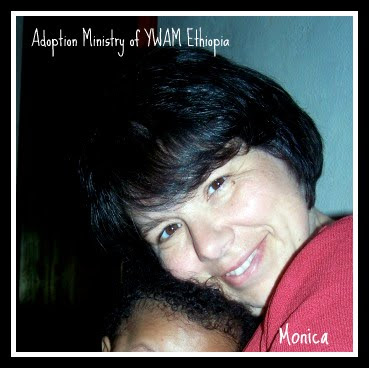 As I watched the chaplain and a young woman with a baby walk to our house, I knew that there was a problem. Is there something that draws them to me, these women with unwanted pregnancies, widows or those trapped in poverty? I answered my door, knowing an issue bigger than what I could resolve was just on the other side.

Her story was sad – seventeen with two babies, one a little over a year old, this new one in her arms only 3 weeks old. From her tattered clothes, I knew money was a problem. She said that her work over a bar would not allow for the baby, so he had to go. In her desperation, she had brought this child back to the hospital where he had been born, hoping that someone could help her. She hadn’t heard about me, she was just seeking help from a Christian hospital. Since the orphanage is up and running, I walked with her to the Women’s Affairs office, to get their permission to get the orphanage involved.

All this happened on Monday, so by today (Wednesday), I was feeling like I had done my job getting the ball rolling to help her. But today, I got another knock at the door. This time it was from the official who runs the orphanage. He had brought this same young woman with the baby back to my house for me to get her HIV tested and then have me take the baby to the orphanage. I agreed to help, figuring that this would not take but maybe an hour (most of that time would be spent on the 1 ½ mile walk to and from the orphanage). Unfortunately, though, this did not end up being an easy task.

At the ART clinic, I found out that this 17 year old, who should have most of her life ahead of her, was indeed HIV+. Now we needed to test the baby, but the type of HIV test available at our hospital is not accurate until the baby is 18 months old and the PCR test available in Addis is not accurate until the baby is 6 weeks old. So what can this stressed out GIRL do for at least 3 more weeks? She can’t handle having to live on the streets with 2 children, but what are her alternatives?

I have been told that the HIV virus can be transmitted by breast milk, but I have also heard the contrary. So after talking to the nurse at the clinic, we both felt that with the baby’s best interest in mind, we should start him on formula until the PCR test could be completed. Luckily, I am well stocked with formula because of some wonderful people in the States, so giving up a precious large can of formula was not as devastating as before. Two bottles and a scrubby for cleaning them was also distributed to her, along with instructions on cleaning and preparation. This little baby boy was literally in sewn together rags, so four outfits and a couple blankets were given (these were just received by our friend Corie last week, providentially).

As this young woman left our home, my mind kept wondering what the outcome is for this little family. If the little boy doesn’t have HIV, I think his chances to be adopted are great but what if he isn’t that lucky? What if he, too, has the dreaded virus? Will no one accept him? Will he turn out like one of our street kids, who have been orphaned by HIV?

My eyes welled up with tears for the future for him, his sibling and his mother. How did I find myself in a better place than them? My mother is well, married and still kicking after 72 years (her birthday was just a week ago). This little baby did nothing to deserve the life he was handed.

Now most would say, “We can’t help everyone” or “You did the best you could.” But as I looked at his perfect little body, I wanted to scream, “This is UNFAIR!!” My parents always told me life wasn’t fair, but today I saw the proof.

So I have two choices: to forget the situation or get involved. Plain and simple, I am at a fork in the road and I can choose to ignore him and his family’s needs or try to lighten their load.

My oldest daughter quizzed me the other day and asked, “Mom, what was the sin that made God destroy Sodom?” I said confidently, “Their sexual sins.” She told me to look up a scripture – Ezekiel 16:49. “Now, this was the sin of your sister Sodom: she and her daughters were arrogant, overfed and unconcerned; they did not help the poor and needy.”

Wow, I don’t know about you, but I am not wanting fire to come down from heaven because I knew that I should help but I was too arrogant, overfed (Thanksgiving is tomorrow, so that hit home) or unconcerned. So pray for me, that I will help this family in the way that Christ would have helped them. Pray that I do nothing more or less than I would want done to help my own family.