written by Joan Brown
Joan recently returned from a trip to Ethiopia with the ‘Women to Women’ team sent by Adoption Ministry. Joan and her husband Tommy are adopting two children from Ethiopia. 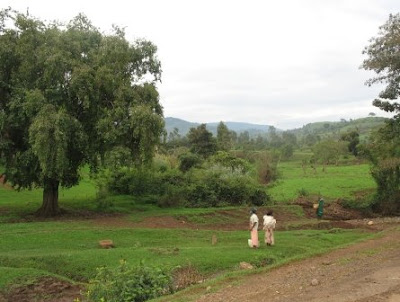 The ride to Gimbie was more than a ride; we were treated to a panoramic view of a part of the earth worthy of dreams and poetry. But for all the beauty of the countryside, what we were to behold in Gimbie was far more precious than the contents of dreams and poetry. The Lord allowed us a glimpse of His agony: the small, the poor, the orphaned. There were many but I will tell you of two:

Two boys – eight years old. One had curly hair, one had coarse and straight. Both had that Ethiopian caramel skin. One coughing, one not. Both infected with that hideous disease we call AIDS. They came into the hospital together because, you see, in this hospital in Gimbie, the nurses don’t nurse the sick the way they do in the United States. They are skilled at delivering medications and treatments, but they do not deliver bedside care. It is the hospital’s policy that any patient admitted must be accompanied by a family member. The family member administers bedside assistance around the clock.

A stroll through the hospital reveals the unusual scene: the patient recovering in the bed, often many members of the family surrounding the patient, sometimes a goat, sometimes a chicken. But orphans do not have family members. Or else they would not be orphans.

These two little boys appeared at the hospital. Curly was coughing and very weak, in need of specialized care. His fellow eight-year-old street mate announced he would be Curly’s caretaker. And so there they would spend the next few days together still – Curly receiving treatment for his active tuberculosis by a lovely missionary physician from Argentina, and the dear little friend, tidying his bed, fetching him water, covering him while he chilled from his fever. 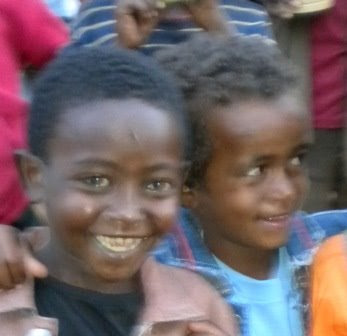 These are the children of the street. They have no human guardian. The physician brought this case to the attention of another missionary who is actively assisting mothers who wish to have their babies adopted immediately after delivery. But with active tuberculosis, this child could not be taken in with the infants to be adopted.

The need is clear. It is real. So real, on that day, we could reach out and touch it. It was packaged in tiny little eight-year-old bodies, bodies that have known and seen more than enough sorrow and hardship. But the Lord knows and sees as well. And He will not turn away. He has sent one of His warriors to Gimbie, having instructed her to build an Orphans and Widows’ Home there. Her name is Tezera and the Lord has filled her with His Spirit. She is gathering together the staples she needs: permission from local officials, a house, staff and beds – and the children are coming. Like a flood, they are coming. The Lord will lead them out of the stagnant, standing water of the streets, where they have been tattered and torn, left hungry and cold, left with AIDS and for death. He will guide them to a home where they can rest, eat and play and heal, drawing from springs of living water whose source is eternal. He will provide for them an earthly guardian under His cover. And we are called as witnesses and to lend support.

Before we departed from Gimbie, we gave money for clothing for these children. Each one chose his own outfit. Each one chose sturdy denim: jackets and jeans. And for their feet, they chose soft rubber boots, not just any boots, mind you, these boots were of fantastic colors – lime green and blazing purple, colors I’m sure that were woven into Joseph’s very special coat. Colors made in heaven. Colors worn by princes.

Adoption Ministry of YWAM Ethiopia is establishing three new Orphans and Widows’ Homes in this region. We will be renting, furnishing and staffing three separate facilities to house and minister to both widows and orphans. Your participation will make all the difference! If you or your church would like to be a part of sponsoring this work, please contact us for more information.