A Walk to Beautiful 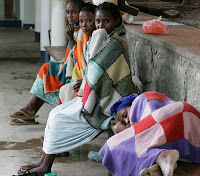 The Fistula Hospital
by Candy Hagman
There is an amazing ministry that captured my heart during our recent mission trip to Ethiopia which I feel compelled to share with you. The facts are a bit graphic but so necessary to share.

Try and imagine what it would be like to have a physical condition that alienated you from family and friends, not knowing there is a solution, and not having the resources to take advantage of the solution when it is offered. This is the present reality for women who suffer from the childbirth condition known as fistula.

There is a hospital in the capital city of Addis Ababa called “The Fistula Hospital.” This amazing ministry was started by Reginald and Catherine Hamlin in 1974. Let me explain the devastation of fistula and then tell you about the healing the hospital brings to thousands of hopeless women and shattered lives.

The most devastating of all childbirth injuries
An obstetric fistula develops when blood supply to the tissues of the vagina and the bladder (and/or rectum) is cut off during prolonged obstructed labor. The tissues die and a hole forms through which urine and/or feces pass uncontrollably. Women who develop fistula are often abandoned by their husbands, rejected by their communities, and forced to live an isolated existence.

More than two million women live with fistula
Eradicated in western countries at the end of the 19th century when cesarean section became widely available, obstetric fistula continues to plague women throughout the developing world. It is estimated that there are 100,000 new fistula cases each year, but the international capacity to treat fistula remains at only 6,500 per year. It is estimated that the world’s population of fistula sufferers is more than two million.

The World Health Organization has called fistula “the single most dramatic aftermath of neglected childbirth.” In addition to complete incontinence, a fistula victim may develop nerve damage to the lower extremities after a multi-day labor in a squatting position. Fistula victims also suffer profound psychological trauma resulting from their utter loss of status and dignity.

The root causes of fistula are grinding poverty and the low status of women and girls. In Ethiopia, the poverty and malnutrition in children contributes to the condition of stunting where the girl’s skeleton, and therefore her pelvis, do not fully mature. This stunted condition can contribute to obstructed labor, and therefore, fistula.

This typically is how a fistula develops: A woman goes into labor out in a village. She pushes and pushes. The baby will not come out and eventually dies. Her labor continues for four to five days, while tissue around the baby’s head dies. Eventually the baby’s brain turns to liquid and the head is finally able to contract enough to fit through the birth canal. (I know this is a heart wrenching fact, but when you think about it, isn’t it wonderful God did it that way? Otherwise the baby AND the mother would die.) After the baby comes out the mother starts leaking urine and sometimes feces. She is often abandoned by her husband and ostracized by her family. Women have lived in this awful condition for up to 40 years.

Fistulas don’t happen here in the U.S. unless a stray cut from a scalpel occurs during an operation. I have a friend who had a fistula on her intestine caused by a scalpel cut from a surgery seven years ago. She was having all kinds of problems and it took the doctors a long time to figure out what the core issue was because it is so rarely seen in the U.S.

While we were in Ethiopia we had the rare privilege of touring the hospital. We saw first-hand that it is not just a hospital, but a ministry yielding eternal rewards. The couple who started it, Reginald & Catherine Hamlin, are strong Christians. Since her husband’s death in 1993. Catherine Hamlin continues performing the much needed fistula surgeries even though she is in her seventies.

Women walk hundreds of miles to get to the hospital. Some can afford to begin their journey on a bus but are often kicked off because of their offensive smell. They arrive in urine soaked clothes, barefoot and penniless. Fortunately, there is no cost to the women once they arrive, but getting to the hospital where they can find the help they need is often a daunting task.

As we were standing by the front door during a pause in our tour, we saw three women who had just arrived to check in. The smell was overwhelming and almost unbearable. It broke my heart to see their suffering. I wanted to hug each of them and say “You are a daughter of the King!” (I am crying even now as I think of them.)

Fortunately the hospital doesn’t just heal their fistula. They are taught to read and write (which is a challenge because of the many languages) and they are taught the Good News of Jesus Christ. Once they have healed, they are given a new dress and money for transportation back to their village. Can any of us imagine the effect on these women once their health and dignity has been restored?

Some of the women are so damaged they need to have a permanent ileostomy. The follow-up care they will need for the rest of their lives makes it impossible for them to return to their villages. Some of the women have no life to go back to so the Fistula Hospital tries to employ as many of these women as possible, or teach them skills so they can get a job and support themselves. The women are told they need to have medical care the next time they get pregnant and are invited to come back to the Fistula Hospital to deliver their babies where they can be closely watched and receive proper care.

The Fistula Hospital was featured on Oprah about a year ago and Oprah has paid for one of their buildings. If you would like further information or would like to know what you can do to help, the web site it is : http://www.fistulafoundation.org/. Catherine Hamlin has also written a book called, “The Hospital by the River,” which I highly recommend. A few months ago there was a documentary on television called, “A Walk to Beautiful,” which was about this hospital and the plight of those who suffer from this preventable condition. The plight of these women deeply touched my heart and I wanted to share it with as many of you as possible. As you think of these women, I would like to ask you to pray for them. Let’s work together to eliminate as much suffering as possible and share the Gospel of Jesus Christ so these women can be healed body, soul and spirit.