A Time To Listen – A Time To Pray 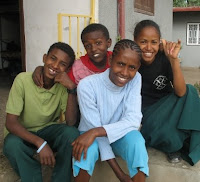 My wife Liane and I led a missions team to Ethiopia this past July bringing encouragement to orphans and widows, teaching children in a VBS setting, giving medical check-ups to street children, and building relationships with YWAM leadership in Ethiopia. A busy time! My trip this past October was much more relaxed and I was able to devote longer periods of time to listen to the children’s testimonies and to minister to the spiritual needs of the YWAM Children’s Director as well. This was a great privilege.

I stayed in a small wooden building in the YWAM Children’s Home compound. My makeshift room soon became known as a prayer chapel. The young people came one by one eager to tell the amazing stories of their life experiences. Through tears, they recollected their parents’ death from complications due to AIDS and the terror of being turned out onto the streets by relatives, some as young as 5 or 6 years of age. They laid bare their souls as they told about begging for food to stave off starvation. Some of the children had formed pseudo-family groups for protection and then watched as these “family members” over-dosed on street drugs or were killed in gang violence.

When the leader of YWAM’s Children’s Home showed up with bread and tea to give to the hungry children on the streets, it was hard for these throwaway children to believe Abdissa was genuine and had pure motives. Abdissa did not push children to come in from the streets right away; he spent time getting to know them. He fed them, befriended them and introduced them to Jesus. He reached out as a father to these fatherless children and they slowly began to trust Abdissa. Because of this young man’s consistent love, one by one, 25 children moved into the sanctuary of the Children’s Home where security, regular food, education and reassuring boundaries awaited them. I was able to pray with each young person who came to me and I especially loved the end of their stories when they told about finding the saving grace of Jesus and how He healed them and brought them into a good place.

For several nights I sat and listened to the pain of these young people. I listened to their hopes and fears of the future. My heart began to break like a father for every one of them. I had no solutions to offer. I could only reflect the Father’s love to these children as I prayed for each one, broken but now on the path to wholeness.